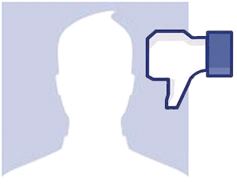 Two studies from the University of Colorado Denver are shedding new light on the most common type of `friend’ to be unfriended on Facebook and their emotional responses to it.

The studies, published earlier this year, show that the most likely person to be unfriended is a high school acquaintance.

"The most common reason for unfriending someone from high school is that the person posted polarizing comments often about religion or politics,” said Christopher Sibona, a doctoral student in the Computer Science and Information Systems program at the CU Denver Business School.  “The other big reason for unfriending was frequent, uninteresting posts."

Sibona’s first study examined `context collapse and unfriending behaviors’ on Facebook and his second looked at `the emotional response to being unfriended.’

Both studies were based on a survey of 1,077 people conducted on Twitter.

The first study found that the top five kinds of people respondents unfriended were:

“We found that people often unfriend co-workers for their actions in the real world rather than anything they post on Facebook,” Sibona said.

One reason he believes high school friends are top targets for unfriending is that their political and religious beliefs may not have been as strong when they were younger. And if those beliefs have grown more strident over time, it becomes easier to offend others.

“Your high school friends may not know your current political or religious beliefs and you may be quite vocal about them,” Sibona said. “And one thing about social media is that online disagreements escalate much more quickly.”

The second study looked at the emotional impact of being unfriended. Sibona found a range of emotions connected to unfriending, from being bothered to being amused.

The most common responses to being unfriended were:

“The strongest predictor is how close you were at the peak of your friendship when the unfriending happened,” said Sibona, who has studied the real world consequences of Facebook unfriending since 2010. “You may be more bothered and saddened if your best friend unfriends you.”

The study found four factors that predicted someone’s emotional response to being unfriended.  Two factors predicted that a user would be negatively affected - if the unfriended person was once a close friend to the one who unfriended them and how closely the person monitored their own friend’s list.

Two other factors predicted that a user would be less negatively affected - if difficulties were discussed between the friends before the unfriending and if the person unfriended talked about it with others after the unfriending.

The research showed that unfriending happens more often to friends who were once close than to those who are acquaintances.

“Despite the preponderance of weak ties throughout online social networks, these findings help to place unfriending within the greater context of relationship dissolution,” the study said.

Sibona said that the ‘one size fits all’ method of ending digital relationships is unique but with real world consequences that warrant additional research.

“If you have a lot of friends on Facebook, the cost of maintaining those friendships is pretty low,” he said. “So if you make a conscious effort to push a button to get rid of someone, that can hurt.”

The two studies were published in the 2014 47th Hawaii International Conference on System Sciences.

Sibona is currently investigating why people either stay on or leave Facebook. Those interested in helping him can take his anonymous survey at: https://businessucdenver.co1.qualtrics.com/SE/?SID=SV_bKJlBiKySkI872t