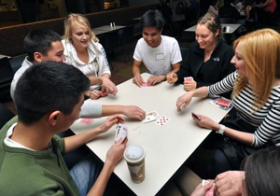 The University of Colorado Denver also landed in the top five in the state, with 1,116 placing it at No. 4.

“Global student experiences enrich the academic and cultural environment of our campus and beyond,” said CU-Boulder Chancellor Philip P. DiStefano. “They create some of our best ambassadors around the world who do our community great honor.”

In his State of the Campus Address on Oct. 16, DiStefano described CU-Boulder’s goal to increase the international student population on campus to 3,240 -- 10 percent of the student body.

CU-Boulder has held the No. 1 spot in Colorado for sending and receiving international students for more than 10 years, according to Larry Bell, director of CU-Boulder’s Office of International Education.

“For over a decade, we’ve been a leader in the state for international education, which -- by the way -- contributes more than $48 million annually to the Boulder economy,” Bell said. “But more importantly, international education through our students’ pursuit of some of the greatest academic, research and service endeavors around the globe brings invaluable diversity and growth to individuals and our communities.”

CU-Boulder also ranked No. 12 in the nation for study abroad participation in semester-long programs.

Other top-ranking Colorado institutions recognized in this year’s Open Doors Report include the University of Denver and Colorado State University.

Emirates Mars Mission to begin journey to the red planet

UCHealth University of Colorado Hospital again named No. 1 hospital in the state

From selfies to being seen: Doctor honors women of color on front lines

Send your thoughts and suggestions for the Newsletter.
END_OF_DOCUMENT_TOKEN_TO_BE_REPLACED