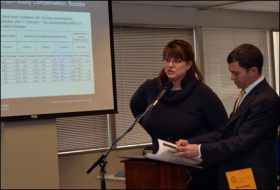 The CU Board of Regents on Tuesday voted 6-3 to approve a slate of tuition rates requested by leadership at University of Colorado campuses and system administration.

First presented to the board at its February meeting at the University of Colorado Colorado Springs, the recommended market plan includes resident undergraduate tuition increases of 6 percent at UCCS and CU Denver, and a combination of a slight rate increase and a linearity shift – from 11.25 credit hours to 12 credit hours –amounting to roughly an 8.7 percent tuition increase at CU-Boulder. CU Denver also will pursue a linearity shift over the next two years. Changes to rates at schools and colleges at the Anschutz Medical Campus include a $20 per credit hour increase for resident undergraduate nursing tuition.

Detailed tuition tables are posted at the Board of Regents’ meeting agenda website.

Neguse said he is “deeply concerned about the affordability and accessibility of a CU education, particularly on the Boulder campus.”

“We obviously need to do something as a state, and to have the conversation is a public good,” Neguse said. “But I’m not convinced that this proposal is the best way forward.”

Geddes said he would have favored a proposal that further increased tuition rates for nonresident students in order to lessen the increase for residents; CU leaders said market forces and competition with other institutions led them not to raise nonresident rates any more than necessary, and noted the continued reliance on nonresident tuition to subsidize residents.

Sharkey expressed “anguish” over the vote, and credited CU faculty and staff with great success in efficiency, and thanked leadership for keeping proposed tuition increases as low as possible. Still, she said she couldn’t vote to support those rates.

Regent Stephen Ludwig, D-Denver, said the board and administration are “between a rock and a hard place.” Regent Glen Gallegos, R-Grand Junction, said “nobody likes having to raise tuition”; in the future, he said he would prefer to have the board presented with three-year to five-year budget proposals, for which Ludwig also voiced support.

In remarks before the board voted, President Bruce D. Benson paraphrased comments by Regent Steve Bosley, R-Broomfield, made at the February meeting: What do we really want to be?

“I know what I want this university to be, and that’s to be a really great university,” Benson said. “We are now, and we have to keep it up. I’m just like all the rest of you … I sure as heck don’t want to raise tuition.”

Benson said he’s among the few people in the state talking about the possibility of asking voters to approve new revenue streams for CU. “This is not the year to go to the ballot; next year probably is the year.”

Earlier in the meeting, Benson said he applauds “our staff and faculty for doing more (with less). At times I think we’re holding down our costs too much.”

“Regents, we’ve got to take care of this place.”

Also at Tuesday’s meeting, the Board of Regents unanimously approved changes to existing student fees, including some fee conversions from course fees to program fees, and implemented new fees such as a $20 biology lab level-3 fee and $5,825 annual fee for a new student housing and dining establishment at UCCS. Some fees were eliminated, including a $25 linguistics single-course fee at CU-Boulder and a $400 Advanced MatLab for Bioengineers and Life Scientists course at CU Denver.