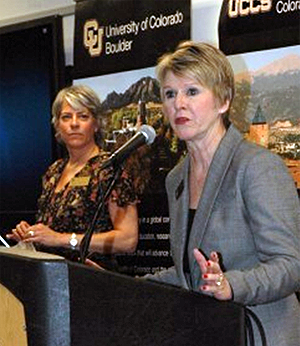 CU Regent Sue Sharkey speaks at a meeting of the CU Advocates while event organizer Michele McKinney stands by.

Twenty years ago, a student at any CU campus paid for roughly one-third the cost of his or her education. The balance came from the state of Colorado.

But today, the situation is exactly opposite – the student and supporting families can expect to pay two-thirds with the state only contributing one-third.

“Forty-eight is not a statistic we should be proud of,” said Sharkey, referencing Colorado’s ranking among the 50 states for funding of higher education.

For almost an hour, Burnett and Saliman drove home points about the lack of state funding, efficiencies that CU has undertaken, the growth of other government spending in other areas and the value of a CU degree as measured in higher individual incomes and lower unemployment rates. 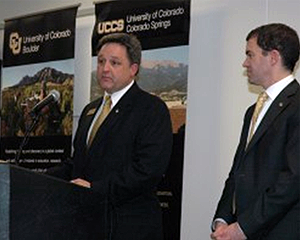 Brian Burnett speaks at a meeting of the CU Advocates while Todd Saliman waits for his turn.

While Burnett and Saliman live the numbers, their task last week was to demonstrate to others how the shifts will soon affect Coloradans and put the cost of attending CU out of reach for low- and middle-income families.

“State support is going down while enrollment is going up,” Burnett said. “This has been a huge challenge for us.”

Saliman explained that only 5 percent of the CU budget comes from the state of Colorado; for UCCS, the figure is 10 percent. In only a few years – possibly as early as 2018 – those numbers will be zero.

“The state won’t have enough money to pay for things it has to pay for,” Saliman said. “And it doesn’t have to pay for higher ed.”

While topics such as eliminating or changing TABOR, increasing private donations, and even a ballot issue to support higher education were raised by audience members Wednesday, there were no tangibles to point to. State leaders are talking, however, about options.

“The value of higher education in Colorado is not a self-evident truth,” said Michele McKinney, advocacy and external affairs director, who organized the event. “But today, we made an installment on changing that.”

In coming weeks, similar presentations will be conducted at other CU campuses; the next one is set for Tuesday at CU-Boulder.

Send your thoughts and suggestions for the Newsletter.
END_OF_DOCUMENT_TOKEN_TO_BE_REPLACED