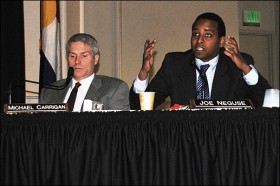 The University of Colorado Board of Regents today narrowly approved tuition increases for 2011-2012 and also OK'd a compensation pool that, if budget conditions are met, would enable raises for faculty and staff for the first time in three years.

The tuition increases are deemed necessary by university leadership because of shrinking state support for CU and other institutions of higher education. The regents met on the Auraria Campus.

"None of us are excited about having to raise tuition," Carrigan said during discussion before the vote. "This ultimately comes down to simple math. We are suffering a decrease from the state of $46 million. Meanwhile, we have an increased mandate of $14 million that the state is requiring us to spend. . . . Only half of this is being made up through tuition increases."

Neguse stressed what he feels is an unfair sharing of the burden by tuition-paying families, though he acknowledged the sacrifices made by faculty and staff throughout the university, where pay has been frozen for three years.

Geddes said CU is "a very good university" and said he supports its well-being, but said that higher education is overpriced when it becomes a burden – either via tax increases or tuition increases.

Intercampus Student Forum Chair Jack Kroll and Faculty Council Chair Mark Malone both spoke in favor of the tuition increases, deemed as necessary to maintain quality throughout the university. Malone said he sends his son to CU-Boulder and that the tuition increase amounts to a 3 percent rise in the overall cost of attendance. "I'm willing to spend the money because it's a choice of quality. . . . This (rate increase) is a good compromise."

"The revenue stream is going to come in whether I supported the increase or not," Sharkey said. "I have faith and confidence in the leaders of this university on how to use this revenue. I'm not going to micromanage how the revenue is spent."

Geddes said he didn't feel the board was micromanaging, because the item was brought before the regents for a vote.

Vice President and Chief Financial Officer Kelly Fox said the 3 percent pool only will be funded if revenue projections for the university stay on track with the budget that will be adopted in June. If student enrollment fell short of expectations, for instance, the salary pool would not be triggered.

Merchant proposed an amendment that would have stipulated campuses explore opportunities for rewarding classified staff; it failed 5-4, with regents Bishop, Bosley, Carrigan, Geddes and Hybl voting no. Still, Faculty Council Co-Chair Lori Krug said she is confident that administration will look for ways of possibly rewarding classified employees. Fox mentioned the restrictions on compensation for classified employees earlier in the meeting and also mentioned that leadership could "look at doing one-time things for classified staff, depending on the dollars available."

Send your thoughts and suggestions for the Newsletter.
END_OF_DOCUMENT_TOKEN_TO_BE_REPLACED