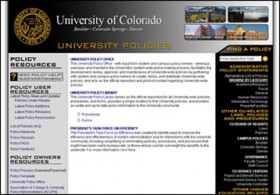 The University of Colorado Office of Policy and Efficiency is asking returning faculty and new employees on all four campuses to take note of changes to 33 administrative policy statements that took effect July 1.

"The university eliminated policies that were obsolete, duplicative or were already covered by regent laws or policies," Montez said. "Or they were streamlined and combined into other related policy statements."

CU has eliminated 19 policies, revised 12, and has added two new policies required by recent changes in state law. Montez said faculty and staff who would like more information about specific policy changes and why they were made should log onto the OPE Web site.

Montez said the university eliminated some policies based on recommendations the President's Task Force on Efficiency made in March.

As the university continues to face budget challenges, strategies aimed at increasing overall efficiency are likely to increase, said task force Chair Leonard Dinegar, senior vice president for administration and chief of staff, who together with Montez oversaw the group's three-month effort. The task force, made up of faculty and staff from all four campuses and system administration, will continue meeting on a quarterly basis.

"As President Benson says, now is not the time to be complacent about the way we operate as a four-campus university system," Dinegar said. "It's not business as usual anymore. We must continue to find ways of streamlining business procedures and improving overall efficiency."