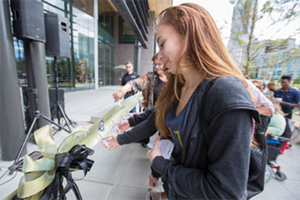 Hundreds of CU Denver students joined in the throng that simultaneously cut the ribbon on the new Student Commons Building on Sept. 9.

As they cut the ribbon that stretched 1,800 feet around this new campus jewel, University of Colorado Denver students Mitchell Devito and Stephanie Adams extolled the amenities that they've already come to love in CU Denver's signature building.

"It's cool. It's very modern, and the classrooms are super-interactive," said Devito, a junior majoring in international relations. Adams, a senior studying public health, added, "There is a lot of comfortable hangout space for students throughout the building, and I like the big windows."

A building designed for students 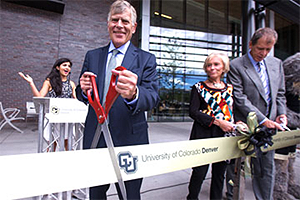 CU Denver Chancellor Don Elliman prepares to cut the ribbon as Lubna Mazin, chair of events and planning for SGA, leads the countdown at the podium.

Scott Cao, president of the Student Government Association, kicked off the festive gathering by welcoming the throng to CU Denver's first "true home." "This building serves only CU Denver students' needs—it's a one-stop-shop for so many student services that were once scattered across the campus." Hoots and hollers erupted when Cao said, "I don't know about you all, but when I look at this brand-new building I just see CU Denver Lynx pride. It's something truly special and tangible that creates a sense of identity not only for students, but for faculty, staff and alumni. It will serve the future of CU Denver well."

"I want to re-emphasize a word that Scott used: This is our home," Elliman said. He noted that CU Denver has been on the Auraria Campus for 40 years but never had a building to call its own. "Every university, especially a growing one like ours, needs a place to call home, and this is it. I think it's one of the most exciting days in the history of CU Denver."

To applause from the audience, Elliman thanked John Lanning, Ph.D., chemistry professor emeritus, for chairing the building oversight committee as well as Anderson/Mason/Dale Architects for the design and Saunders Construction for the build. Months before the building was completed, the Student Commons Building was named Denver's best new building by Westword. Elliman noted that "Student Commons" will serve as the building's name "until we find the name of a generous donor."

The location of the five-story Student Commons Building at the corner of Speer Boulevard and Larimer Street serves to better connect CU Denver's place in downtown Denver. "It's the front door to the whole Auraria neighborhood," the chancellor said. "We couldn't be happier with it."

Cao was joined at the podium by fellow student Lubna Mazin, SGA chair of events and planning. Both student leaders explained initiatives under way to further enhance CU Denver's growth and identity. Cao reminded students about a feasibility study being conducted on a new Wellness and Recreation Center. He encouraged them to fill out surveys that will help "fuel the continued growth and excitement at this university."

Mazin, flanked at the podium by dignitaries and Milo the Lynx, said the senior class is raising donations for a senior gift that will stand in a prominent location. "It's to build a statue of our new school mascot (the Lynx) in front of our new building," she said. "What this statue will mean is this is our home, this is our territory."

And with that, Mazin asked attendees to encircle the new building with their scissors. She then led a countdown that launched the simultaneous, mass ribbon cutting and an exciting new era for CU Denver.

Send your thoughts and suggestions for the Newsletter.
END_OF_DOCUMENT_TOKEN_TO_BE_REPLACED