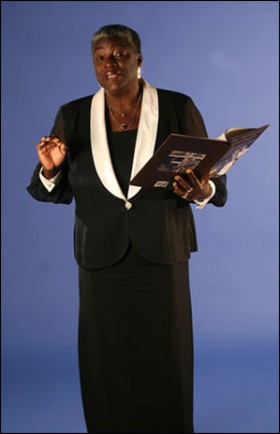 Some would say Professor Barbara Swaby has been giving back since the moment she first stepped onto the Univeristy of Colorado at Colorado Springs campus 33 years ago.

As an ambassador for childhood literacy, Swaby has worked to remove obstacles so that thousands of children can more easily become literate members of society. She has fueled programs such as free community reading evaluations, community reading clinics, and a Learning Literacy On The Go (LOGO) project that within five years has been a conduit for 91,000 books donated to low-income children all over the Pikes Peak region.

Swaby has inspired thousands of UCCS graduate and undergraduate students and community members to recognize the importance of this fundamental skill in a world where technology dazzles so many of us but bookstores struggle to stay in business.

And now, with Swaby's own significant estate commitment to supplement the $500,000 fund-raising goal recently achieved for the Barbara Swaby Endowed Professorship at UCCS, Swaby has ensured that the programs she has spearheaded can persist in perpetuity.

Barbara Swaby herself might not think of such contributions as a "gift."

"The final thing I say to my students," Swaby says, "is this: 'My responsibility on this earth is to share what has been gifted to me. What you have is a trust to you. It does not belong to you. You cannot keep it.'"

Swaby grew up in the West Indies in modest circumstances that rarely lead to distinguished professorships at major American universities. She credits her parents for her success in life and UCCS chancellor Pam Shockley for helping her achieve a position of prominence within the university and the community. "Dr. Shockley walked by my classroom years ago and listened to part of my lecture on literacy," Swaby says. "For some reason, that struck a chord in her. She told me: 'That message needs to be shared.'"

Despite (or perhaps, to a degree, because of) the Tweeting, the texting, the so-called "New Literacies" that have currently taken root among young people, the number of people who are unable to capitalize on the fundamental form of "literacy" is increasing. "The things we do now and call literacy, I don't believe they will ever be out of date," Swaby says. "When we teach children to read, and particularly when we teach children who have little or no probability of upward mobility to read, we don't just give them a living. We give them a life."

Throughout the community, throughout the university, Swaby sees teachers holding their heads high in a service profession that has been "battered, kicked, and whipped." These teachers are making decisions that are based not on compensation but on the development of the future. She has supported her endowment at UCCS not because of the university per se, but because of her desire to say, "That which I do is maximally important to me. When I am dead and gone and forgotten from the face of the earth, I would like to believe that something I have left behind is still of benefit to the children on this earth."

But while others may see generosity, Swaby will leave the term "philanthropy" to others. "I do believe that we owe our children that: the ability to read. It is not a gift. It is something weowe them."

Send your thoughts and suggestions for the Newsletter.
END_OF_DOCUMENT_TOKEN_TO_BE_REPLACED