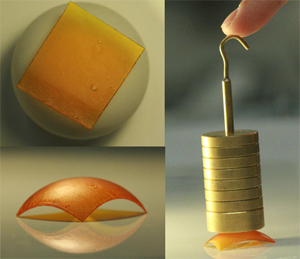 Researchers at CU-Boulder have discovered a new kind of plastic, called “malleable polymers”, that can be reshaped or recycled either by heating or soaking in water. At top left, a piece of the material molds itself to a ball after being soaked in water. At lower left, the dried polymer assumes its new shape and is harder than it was before being modified, as seen at right. Photo courtesy of Wei Zhang.

Researchers at CU-Boulder have discovered a new kind of plastic that can be reshaped or recycled either by heating or soaking in water.

Wei Zhang, assistant professor of chemistry and biochemistry at CU-Boulder

Wei Zhang, assistant professor of chemistry and biochemistry, led an interdisciplinary team of researchers that published its findings in the journal Advanced Materials late last month. Philip Taynton, a graduate student in Zhang’s research group, was part of the team.

Zhang’s research group collaborated with a team led by H. Jerry Qi, a University of Colorado Boulder professor of mechanical engineering who recently moved to the Georgia Institute of Technology. Their work was funded by the National Science Foundation.

The new material is a type of plastic called “malleable polymers.” Also known as “covalent adaptive networks,” these materials’ properties stem from reversible chemistry, which allows chemical bonds between the atoms in the polymer structure to trade places at elevated temperature. 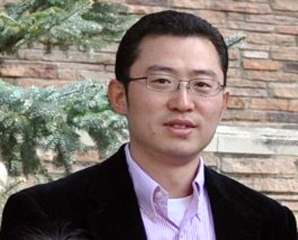 Wei Zhang, assistant professor of chemistry and biochemistry at CU-Boulder

Zhang’s material is unique in that the chemical reaction is also catalyzed -  accelerated – by water.

“This means that our material can be recycled at room temperature using only water and pressure,” Zhang said. “After being ground to a fine powder, the material is pressed while wet to reform a coherent solid.”

Taynton noted that other malleable polymers have some similar properties. But “the advantages of what we have are, 1, it doesn’t need a catalyst, and 2, this crazy interaction with water that we discovered is pretty novel.”

It’s so novel, in fact, that the CU Technology Transfer Office has filed a patent application on the discovery, listing Zhang and Taynton as co-inventors.

Most materials, once they wear out, they are no longer useful, but our stuff, most of the things we’re going to be making, after its initial use, people can just heat it up and mold it into something else they want to use it for.”

One expert who reviewed the journal article commented, “The literature is filled with attempts at ‘green chemistry,’ but this manuscript reports the truly green self-healing of the polymer network.”

The material displayed “impressive recyclability.” It was recycled using mild heating and then ground to a powder through four generations.

The result: The material only got stronger. “The material became slightly more elastic as it was recycled, and its tensile strength also increased slightly,” Zhang said.

While the material can be recycled, it appears particularly well-suited to being reused, Taynton said. “Most materials, once they wear out, they are no longer useful, but our stuff, most of the things we’re going to be making, after its initial use, people can just heat it up and mold it into something else they want to use it for.”

In theory, based on the group’s observations, Zhang said, a piece of plastic equipment made from this type of malleable polymer could be remolded with water or a hair dryer to another form or, if cracked, repaired.

“Because it can be processed at such low temperature, it can be molded directly onto your body without burning you, but it’s actually stronger than the materials they currently use for prosthetics and orthopedics,” Taynton said. “So this could really change the way things are done in that industry.”

Further, the malleable polymer could open the door to customized sporting goods such as “pads that you can mold directly on (to the body), that fit perfectly, that don’t have to be bulky and can be lower-profile,” he added.

In the case of a sports team, “you could basically have one set of pads, and every year you have a different team, you can remold those pads onto the new team. So they’re custom fit, but they can be custom refit.”

Zhang said: “This field is emerging. … It really has a bright future.”

Taynton added, “I hope so, because it’s better.”

Apart from the future, malleable plastics have a past, Taynton noted. For decades, researchers have known that some plastics could be malleable. But at that time, the goal was to create hard plastics that would not lose their shape.

Malleable plastics were said to have had “creep,” and “it was not looked favorably upon,” Taynton said. “Only recently, people have looked back, and it’s exactly the same phenomenon, this ‘creep,’ and ‘creep’ sounds bad.”

“But under our noses all this time was the ability to reuse and recycle (hard plastics), but it’s just not the direction industry went at that time. Now that our society has changed and our outlook has changed, we’re looking back at old papers,” as far back as 1954, that document different types of malleable polymers.

The CU-Boulder team’s discovery is elegantly simple, Zhang said. “It sounds like it’s straightforward, but it works really well. And that’s why industry will also show interest in that kind of technology, because they have an interest in something not exotic, not fancy, but scalable, reliable.”

The researchers are also exploring several other promising applications for their technology.

“The great thing is that this discovery is related to the chemical bond that holds the polymer together. By simply using different starting materials, one could potentially generate malleable polymers with limitless combinations of mechanical, chemical, optical, or electrical properties,” Zhang said.

Taynton noted that one of the pioneers in the field of covalent adaptive networks is another CU-Boulder faculty member, Christopher Bowman, distinguished professor of chemical and biological engineering.

Zhang has been recognized for other work as well. Last year, he won a prestigious Sloan Research Fellowship. That award recognized Zhang’s work in developing novel materials with potential applications in gas separation and storage, solar-energy conversion, chemical sensing and catalysis.

The gas-separation work could lead to new and improved mechanisms of “clean coal”—or carbon capture and sequestration—in which carbon dioxide is captured and pumped underground, where it can become inert.