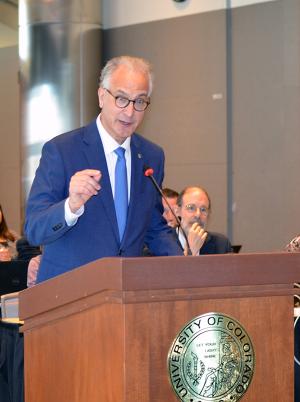 CU President Mark Kennedy at a Board of Regents meeting in September 2019.

CU President Mark Kennedy and the Board of Regents on Wednesday took stock of successes from the system leader’s first year on the job and outlined goals for the coming year.

Like all board meetings since March, the discussion was held remotely via Zoom, taking the place of what ordinarily would have been the regents’ annual summer retreat.

Board Chair Glen Gallegos said the regents recently completed their review of President Kennedy’s first year at CU, and put forth the list of completed goals for the year just ended as well as corresponding goals for the coming year. In presenting the lists, Kennedy stressed that achievements are the result of work among the president, board, administration, faculty, staff and students.

“I believe the No. 1 thing that’s going to lead to our success is our unity,” Kennedy said.

Issues tied to the coronavirus pandemic and the heightened movement against racial injustice frame the key challenges for the coming year.

Kennedy said CU led the state in responding to the coronavirus, and in the coming year must lead the state in returning to campus. He said the challenge will require many pivots and adjustments along the way.

In addressing diversity, Kennedy pointed to the creation of a new system administration position, chief diversity officer, which led to the hiring of Theodosia Cook. “She’s got a big set of goals for the year ahead,” Kennedy said, in leading to greater diversity among students, faculty and staff. For 2020-21, the goal is to set benchmarks via a diversity, equity and inclusion survey, “and to have campus action plans that flow from that.”

The strategic planning process that Kennedy launched last year was to have resulted in a completed plan for review by the board at this summer’s retreat; that work was paused in order to meet immediate challenges of COVID-19. Kennedy said his new goal is to have the completed strategic plan in place for consideration by regents at next summer’s retreat.

The president also is looking to boost revenue streams beyond state funding. He intends to have the year’s research award total, most recently $1.08 billion, beat a three-year rolling average. Fundraising is expected to be down across the country, and CU is no exception, Kennedy said. Following what is expected to be a $440 million fundraising total for the just-completed fiscal year, next year’s goal is $330 million.

Also during Wednesday’s Board of Regents retreat:

Tagged with:
Board of Regents, President Mark Kennedy