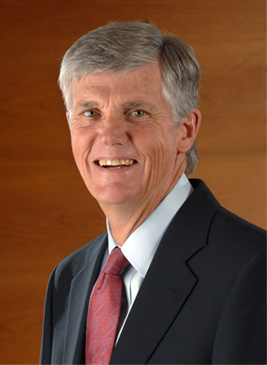 Having led the University of Colorado’s fundraising arm to its five most successful years for private support in the university’s 135-year history, Wayne Hutchens (BS ’67, CU-Boulder) will retire after nearly six years as president and chief executive officer of the CU Foundation.

“Under Wayne’s guidance, the CU Foundation has inspired unprecedented confidence in alumni, donors, friends, and citizens of Colorado and beyond,” says Bruce Benson, president of the University of Colorado. “Wayne has built a great organization that will allow us to continue to exceed our fundraising goals and add value to CU’s people, places and programs. Thanks to his leadership, we have made significant strides toward the $1.5 billion fundraising goal for the Creating Futures campaign.”

Hutchens will continue to lead the foundation through an executive transition period expected to occur in the first half of 2012, as the CU Foundation Board of Directors works with university leadership to select a successor.

“Certain leaders are transformational,” says Mary Lee Beauregard, chair of the CU Foundation Board of Directors. “Wayne was the right person with the right skills at the right time to lead the foundation to the success we are experiencing today.”

Since Hutchens took the helm in 2006, more than $984 million in private support has been recorded on behalf of the University of Colorado, including more than $500 million by the CU Foundation. The investment returns on the CU endowment, managed under the CU Foundation’s auspices, have been in the top 10 percent of similarly managed funds. The foundation’s operations have become substantially more efficient and effective during Hutchens’ tenure, with the organization expanding its expertise in preparation for the Creating Futures campaign, while reducing its cost to raise a dollar.

“It has been my pleasure to work with Hank Brown and now Bruce Benson during their respective presidencies, as well as with our wonderful campus leadership,” Hutchens says. “The University of Colorado is an outstanding institution of which we can all be proud.”

Before Hutchens’s appointment to the CU Foundation, he had a 29-year career in the banking industry, most recently as chairman of Chase Bank Colorado, where he oversaw two successful mergers. He has long been active in community service and has chaired the board of the Denver Museum of Nature and Science, the Colorado Council for Economic Education, and the Colorado Outward Bound School. He has scaled all 54 Fourteeners in Colorado and numerous other peaks around the world, including Mount Kilimanjaro in Africa and Mount Elbrus in Russia. He received an undergraduate business degree from CU-Boulder in 1967.