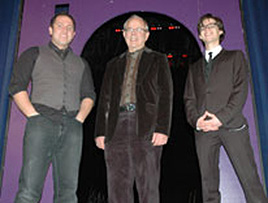 Standing at the entrance to the theater at Kunsmiller Creative Arts Academy in Denver are, from left, Martin Palmer, College of Arts & Media Dean David Dynak and Daniel Fuller. Palmer and Fuller, graduate students in CAM Recording Arts, assisted eighth- and ninth-grade classes at Kunsmiller produce a soundscape production of “Charlie and the Great Glass Elevator” as part of their ArtsBridge Scholarship Project.

The whisk of an interplanetary elevator. The strange babblings of alien creatures. The Cronkite-like baritone of a news anchor.

Middle school students at Kunsmiller Creative Arts Academy in Denver melded these sounds -- and many others -- into a 20-minute soundscape piece that employed state-of-the art equipment and, especially, enthusiastic mentoring from students at the University of Colorado Denver.

At the helm of the semester-long creative process were Martin Palmer and Daniel Fuller, two Recording Arts graduate students in the College of Arts and Media (CAM). The students, with oversight from CAM Recording Arts faculty member Sam McGuire, earned ArtsBridge scholarships to spend 40 hours working with the middle schoolers on a collaborative arts project.

Working with the students in teacher Sylvia May's eighth- and ninth-grade technical theater classes, Palmer and Fuller and the 20 students decided to use the Roald Dahl book “Charlie and the Great Glass Elevator” as inspiration for their radio theater piece.

CAM Dean David Dynak attended a performance of the “Glass Elevator” at Kunsmiller on Dec. 9. There are 31 universities in the country and Northern Ireland that are ArtsBridge institutions, augmenting arts curriculum at K-12 schools. CAM raises money to support the arts collaboration program, which costs about $25,000 annually, Dynak says. Other CAM student-led ArtsBridge projects at Kunsmiller this year -- the partnership is in its second year -- include dance, theater and digital animation.

“The ArtsBridge program allows our students to become teaching artists. So when they go into schools they aren’t going so much as educators, but they're going in as artist with a product in mind and that has come from conversations with the classroom teacher,” Dynak says. “For our students, when they relate to ninth-graders, eighth-graders, fourth-graders, second-graders, they really get an amazing sense of how arts communicate.”

Fuller says he enjoyed the process of collaborating with the students to generate a script that’s replete with ad-libbed, humorous lines. “It was primarily them doing the writing,” he says. “We chose the story but we let them kind of run the story wherever they wanted.”

The CAM students allowed the students to use a CAM-purchased portable surround-sound system that gave the effect of various sounds filling the theater space. The system will be used in CAM classrooms after the ArtsBridge project.

Palmer was pleased to see the students gain confidence with technology they’d never seen before. “It’s really neat to see these students, as young as they are, have so much confidence in a particular craft,” he says. “A lot of people grow up thinking you'll never make money in the arts, but here they’re learning the practical technical skills that do translate to a steady career.”

May said the ArtsBridge projects link the young students to the outside world.

“Having people come from college and letting my students see they can be mature, have fun and get a higher education, I think, is really important,” she says. “They've had a lot of fun with this project.”

Kunsmiller Principal Pete Castillo wants the arts collaboration with CU Denver to expand to where it reaches every grade level at the magnet school. “We want to make ArtsBridge a built-in component for our core curriculum,” he says.

That would be fine with Antonia Huynh, an eighth-grader who played the news anchor in the “Glass Elevator” production.

“I learned some new vocabulary words,” she says. “I learned mainly about the soundscape program and how creative and how much fun it is.”