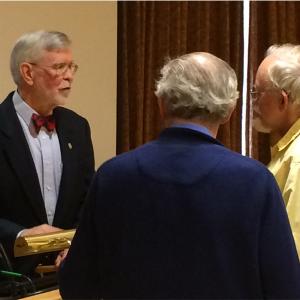 David Skaggs chats with CURFA members at the group’s November meeting at CU-Boulder.

Efforts to pursue the possible establishment of a CU-Boulder Retired Faculty Association are moving forward with the Boulder Faculty Assembly Executive Committee’s recent expression of support.

While CURFA is based at CU-Boulder and largely consists of past CU-Boulder faculty, the campus does not have its own assembly that’s analogous to those at UCCS and the CU Anschutz Medical Campus. CU Denver also has considered establishing its own RFA.

The matter was one of many topics brought up at this fall’s CURFA Business Meeting at the University Memorial Center, CU-Boulder. Also on the agenda at the Nov. 9 meeting:

CURFA grants: Jim Alleman encouraged retired faculty to take advantage of CURFA’s Research and Creative Works Awards. The association awards five grants, each for $1,000, annually, with the 2016 application period beginning Jan. 1 and continuing through March 1. The funding may be used for new and continuing research projects by faculty officially retired from CU.

Alleman said he used the grant he received to complete a book, “Demand for Communications Services – Insights and Perspectives.” Marjorie McIntosh appeared at the meeting to present her work on the Boulder County Latino History Project, which benefited from a CURFA grant.

Application information will be posted at the CURFA website.

Among the challenges posed by TABOR, Skaggs said, is its “bizarre limitation on what the state can spend,” tied to inflation and population growth. “It’s an ostensibly benign provision, until you realize that the cost of living hugely underestimates the cost of goods and services the state government needs to buy.”

Pointing to recent headlines about the proposed state budget for next year and looming cuts for higher education, Skaggs said, “There is more than a thread of cause-and-effect between (TABOR) and real effects on the lives of the people of Colorado.”

Because TABOR requires that any new tax be subject to a vote of the electorate, TABOR “decimates the ability (of elected officials) to do their job.”

As a citizen voting in an election, “you’re not required to think about anybody’s needs but your own,” Skaggs said. “Representatives have to pay attention to other points of view. This isn’t just an act of arbitrary or theoretical dismay…. It goes to the core of the way we organize ourselves as a society.

“The TABOR case is all about understanding our own form of government.”

Study participants needed: Angela Bryan of the CU-Boulder Department of Psychology and Neuroscience gave a presentation on Project FORCE (Fitness, Older adults, and Resting state Connectivity Enhancement). The ongoing study on brain aging is in need of adults age 60 and over who are sedentary. “The biggest problem we have in Boulder is finding anyone who isn’t already exercising,” Bryan said. For information on participating, call 303-492-9549 or email force.researchstudy@gmail.com.