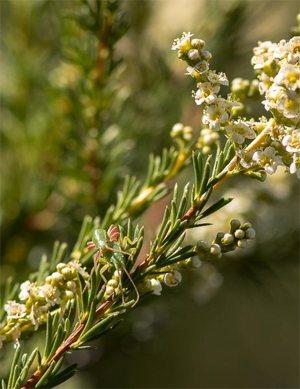 A walking stick insect camouflages with a chamise shrub in southern California. The ability of the the insect, Timema cristinae, to be well camouflaged affects other insects living on the same plant. Photo courtesy of Tim Farkas.

A California walking stick insect that has evolved to produce individuals with two distinct appearances—an all-green form that camouflages well with broader leaves and a form with a white stripe running down its back that blends better with needle-like leaves—can markedly affect its broader ecological community when the appearance of the bug is mismatched with the plant it’s living on.

The new findings, based on research carried out at the University of Colorado Boulder, illustrate the ability of rapid evolution to cause a cascade of ecological impacts.

The scientists found that a walking stick insect that is not well camouflaged is more likely to be eaten by birds, and in turn, those birds are then also more likely to feast on the spiders, caterpillars, plant hoppers, ants and other arthropods living on the same plant. The resulting overall reduction in bugs living on the plant also means that the plant itself was less likely to be attacked by sap-feeding insects.

“Our study shows that the evolution of poor camouflage in one species can affect all the other species living there and affect the plant as well,” said Tim Farkas, lead author of the study published in the journal Current Biology. “It’s intuitive, but also really surprising.”

Farkas led the study as an ecology and evolutionary biology doctoral student in Assistant Professor Patrik Nosil’s lab at CU-Boulder. Nosil and CU-Boulder doctoral student Aaron Comeault are also study co-authors. All three have since moved to the University of Sheffield in England.

Evolution is often thought of as a process that unfolds slowly over centuries if not millennia, as individuals with genetic advantages have a greater chance of surviving to pass down their genes to the next generation.

But scientists are increasingly identifying instances when evolution works on a much shorter time scale. An oft-cited example of rapid evolution is the peppered moth. The light-colored moths were historically able to camouflage themselves against lichen-covered tree bark in England. A darker variant of the moth existed but was more rare, since birds were able to easily spot the dark moth against the light trees. But during the industrial revolution, when soot blackened the trees, natural selection favored a darker variation of the moth, which began to flourish while the light-colored variant became less common.

Evolution on such a rapid scale opens up the possibility that the process could have ecological effects in the short term, impacting population sizes or changing the community makeup, for example.

Researchers have begun to compile examples of these “eco-evolutionary dynamics.” The new study offers some of the most comprehensive evidence yet that evolution can drive ecological change.

“We have combined both experimental and observational data with mathematical modeling to show that evolution causes ecological effects and that it does so under natural conditions,” Farkas said. “We also focused simultaneously on multiple evolutionary processes—including natural selection and gene flow—rather than just one, which affords us some unique insights.”

Farkas and his colleagues—including Ilkka Hanski and Tommi Mononen, both of the University of Helsinki in Finland—focused their attention on the walking stick Timema cristinae, which lives in Southern California. The flightless insect lives primarily on two shrubs: chamise, which has narrow, needle-like leaves; and greenbark ceanothus, which has broad, oval-shaped leaves. The variant of the walking sticks that have a white stripe down their backs are better camouflaged on the chamise, while the solid-green walking sticks are better camouflaged on the greenbark ceanothus.

The research team began by cataloguing the walking sticks living on the two types of shrubs in 186 research patches, and determined that the striped walking sticks were indeed more common on chamise and vice versa.

The scientists surmised that the differences were caused by scrub jays and other birds that feed on walking sticks. A group of easy-to-spot walking sticks could attract birds, which might then feed on other arthropods as well. To test their idea, the researchers repeated the experiment, but in this case, they caged some of the shrubs to keep the birds from feeding. As they expected, the caged chamise stocked with un-striped walking sticks did not have the same drop in numbers as they did when the bushes were not caged.

“Studies of how rapid evolution can affect the ecology of populations, communities and ecosystems are difficult to accomplish and therefore rare,” Farkas said. “We’re hoping our research helps biologists to appreciate the extent of dynamic interplay between ecology and evolution, and that it can be used by applied scientists to combat emerging threats to biodiversity, ecosystem services, and food security.”

Funding for the study was provided by CU-Boulder, the European Research Council and the Academy of Finland.

Cover image: A walking stick insect camouflages with a greenback ceanothus bush in southern California. The ability of the the insect, Timema cristinae, to be well camouflaged affects other insects living on the same plant. Photo courtesy of Tim Farkas.