"Let me tell you about the very rich. They are different from you and me,” F. Scott Fitzgerald wrote in a 1936 short story. Likewise, very ill patients facing the uncertainty of disease may feel isolated from their healthy, knowledgeable physicians.

But as Jack McKee, the aloof surgeon turned gravely ill patient of the 1991 film “The Doctor,” observed, “Every doctor becomes a patient somewhere down the line.” When the disease is deadly, the physician experiences fear not through a glass, darkly, but face to face, in the words of Corinthians. 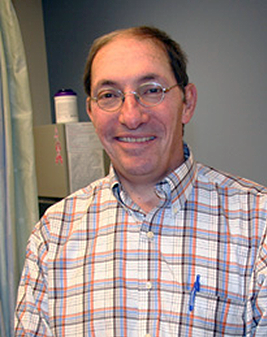 Ian Rabinowitz, MD, a specialist in oncology and hematology at the University of New Mexico (UNM) Cancer Center in Albuquerque, suddenly assumed the role of patient on January 25, 2011. There was little or no warning. Rabinowitz was a 52-year-old nonsmoker, married with two children, and in the midst of a satisfying career as a clinician and researcher at UNM, where he had been since 1997.

He was working in clinic that late January day when he abruptly suffered a seizure and collapsed. Rescuers administered CPR, breaking three ribs in the process, before rushing him to the emergency department for a CAT scan that was inconclusive. An MRI later that evening revealed nothing abnormal, a neurology resident told Rabinowitz. But moments later, the attending neurologist shocked him with the news that he had metastatic cancer. Subsequent tests showed his lung cancer had spread to his brain, bones, and the mediastinum.

He compared the emotional impact of the diagnosis to the physical fury of the tsunami that engulfed Japan later that year. “It took me a month or so to separate my emotions,” he said.

There was a sliver of hope. Genetic testing of Rabinowitz’s tumor showed he is among the 4 percent or so of non-small cell lung cancer patients with an anaplastic lymphoma kinase (ALK) gene rearrangement that drives tumor growth. At that time, a phase 3 trial was underway comparing crizotinib, a drug that targets the rogue ALK protein, to standard chemotherapy in patients with advanced lung cancer who had the mutation.

Rabinowitz responded initially – his tumors shrank by 50 percent and he was able to return to work – but after seven months, the tumor growth recurred and he suffered paralysis of the left vocal cord. 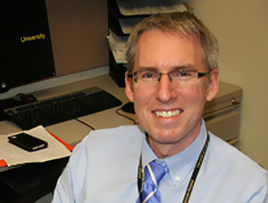 But if Rabinowitz’s cancer marches on, so does science. A year ago, he spoke with Ross Camidge, MD, head of the Lung Cancer program at UCH. They discussed research and development efforts to improve on crizotinib, which had produced a variety of side effects in Rabinowitz, including liver dysfunction. In June 2013, Camidge enrolled Rabinowitz in a phase 1 trial of a second-generation ALK-inhibitor for patients whose disease had progressed after treatment with crizotinib. The new drug is “cleaner” than crizotinib, which also inhibits several other target molecules, Camidge said.

“In some ways, crizotinib just happens to hit ALK,” he said. If crizotinib was a Swiss army knife, with many possible targets, the new drug was more akin to a screwdriver aimed only at the ALK mutation, Camidge said.

During a break in a quick clinic visit to UCH early this month, Rabinowitz said he’s tolerated the trial drug well, the only side effect being a mild rash. The tumors aren’t gone, but they’ve shrunk 80 to 90 percent and he’s working full time.

By definition, contracting a disease is a life-changing event, but I wondered how those changes affected a physician like Rabinowitz, who has spent most of his professional life helping others battle the disease rather than confronting it personally.

A big worry, he said, was that his colleagues would let him coast when he came back to work. “Initially, I thought they gave me easy jobs because of my ‘disability,’” Rabinowitz said. He quickly set them straight. “I told them to let me do my job. I wanted to be full time, as before my diagnosis.” His peers have honored that, he said.

Another question was how to discuss his own disease with his patients – if at all. Rabinowitz has made no secret that he has cancer, but he focuses during a clinic visit on his patients, not on himself. Still, he acknowledged he’s a different physician than he was three-and-a-half years ago.

“I’m more empathetic than I was before,” Rabinowitz said. In particular, his diagnosis brought home to him the crushing emotional weight borne by caregivers. “My wife and family took most of the burden,” he said. That knowledge taught him the importance of drawing patients’ spouses, children, and parents into the circle of care. When he tells them the disease will be harder on them than it will be on the patient, he sees heads nod.

“Caregivers don’t get the sympathy and support that patients get,” Rabinowitz said. “They need to know that people understand the burden they are bearing. A patient’s support system needs a support system as well.”

“As a physician if I am too emotional when bad things happen I can’t do my job, but, equally, if I’m not emotionally involved at all, I shouldn’t do the job,” he said. “Patients and caregivers want to know that we genuinely care. It’s not all about facts and numbers.”

Camidge said Rabinowitz is an “easy” patient, with whom he can converse during clinic visits in “medical shorthand.” However, in treating Rabinowitz and other physician patients, Camidge said, it is important to personalize discussions that can otherwise take on the air of two colleagues going over another patient’s case.

“I sometimes have to bring back to them that we’re not discussing a third party – it’s about them,” Camidge said.

For his part, Rabinowitz said he values Camidge’s willingness to speak to him frankly about his condition. He says, ‘This is what you’ve got, and these are the next steps,’” Rabinowitz said. “There are no unrealistic expectations.”

Having lived more than twice as long as the average for people with stage IV lung cancer, Rabinowitz is determined to make the most of the time that remains. He will continue taking the trial drug unless its side effects become unacceptable or the cancer grows.

“The disease is not curable,” he said. “I have no illusions. My goals are to have the maximum quality and length of life, and as long as I attain those goals, I will keep going with other treatments.”

In the end, it seems that in fundamental ways Rabinowitz and Camidge are no different than you and me. They search for ways to rescue a few more of the minutes, hours, and days that make life meaningful – all the while knowing that nothing is guaranteed.

“We are on the cutting edge in these treatments,” Camidge said. “There is no roadmap for what is in front of us. We’re more like Lewis and Clark, going through new lands.”

Tagged with:
University of Colorado Hospital