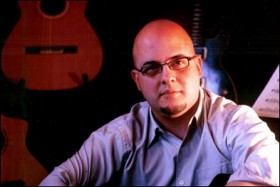 Rodolfo "Rudy" Betancourt has been appointed director of Macky Auditorium after a national search. Betancourt, who follows Interim Director Louis Patterson, is responsible for overseeing the auditorium's operations and managing its staff.

"It is a great honor to become the director of a beloved performing arts venue and such a signature feature for the University of Colorado at Boulder," said Betancourt, who took the post July 1. "As Macky Auditorium enters its 100th anniversary, it continues a strong legacy of providing high-quality productions and life-enriching events. I look forward to working with the staff and crew, CU Presents, the College of Music, the University of Colorado at large, our partners at the Boulder Philharmonic Orchestra and all the event presenters. I'd also like to thank Lou Patterson for being an outstanding interim director for Macky."

Betancourt has been actively involved in performing arts most of his life, both on and off the stage. A native of Caracas, Venezuela, Betancourt has been in the U.S. since 1995. In just four years, he earned a bachelor's degree in music performance from Manhattan School of Music and a master's degree from the University of Denver.

Betancourt's career in performing arts management began in 2000, first as an education and artistic intern at the Colorado Symphony Orchestra. He soon was hired as artistic assistant; by 2003, he was the production manager, reporting directly to the vice president of marketing and sales. Betancourt moved to Swallow Hill Music Association in 2004 as director of marketing and communications. During his tenure, Swallow Hill Music experienced incredible growth as an organization, both in its school and concert departments. In 2009, Swallow Hill Music became the producer for the Summer Concert Series for the Denver Botanic Gardens because of its marketing engine and reputation for its stage production capabilities.

In 2005, Betancourt completed a certificate in business management from the University of Denver's Daniels College of Business, and won a Forty Under 40 Award from the Denver Business Journal for his professionalism in performing arts administration and commitment to the community.

While pursuing his performing arts management career, Betancourt has remained active as a musician. He studied classical guitar under Ricardo Iznaola while at DU, and has performed and recorded with the Colorado Symphony Orchestra under conductor Marin Alsop; composed and performed for the Playground Ensemble, artist-in-residence at the Lamont School of Music at the University of Denver; and leads the Betancourt Trio, which fuses African, Latin, Caribbean and jazz influences.

He lives in Englewood with his wife, Rebecca Laurie, and son Aden.