Outstanding faculty members at the University of Colorado Denver will be honored at an annual ceremony 3-5 p.m. Friday, Sept. 10, in North Classroom, where they also will be featured on the Faculty Wall of Fame.

Each UC Denver school and college, as well as the Auraria Library, nominated a total of 29 faculty members for awards for Excellence in Teaching, Research and Creative Activities, and Service. The Thomas Jefferson honoree and the winner of the inaugural Provost's Award also will be honored at the ceremony.

Provost's Award for Excellence in Practices Related to Non-Tenure-Track Faculty: Department of Psychology 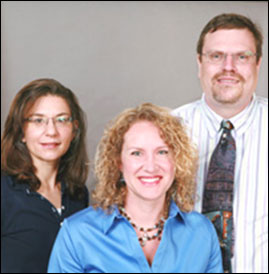 The award is given to an academic unit for excellence in practices regarding non-tenure-track faculty (NTTF) members. Criteria for the award include a high level of meaningful involvement of NTTF within the unit, demonstrated excellence in the level of impact or contribution and fulfilling the mission of the unit.

The psychology faculty members have been active in outcomes assessment, graduate thesis committees, clinical supervision, mentoring and advising students, teaching at all levels, college- and campus-level committees, and in building interdisciplinary programs that span the Denver and Anschutz campuses.

Bashe, Bihun and Everhart impressed the selection committee with a clear vision for their future and great leadership in identifying ways to incorporate NTTF into the department.

Enthusiastic and fun, Durham is a student favorite. In his nomination packet, one student wrote: "Dr. Durham has a unique way of presenting new concepts and ideas in a way that is fun and makes intuitive sense to the students. I have had the privilege of learning from many great professors during the time I was at UC Denver. However, Dr. Durham stands head and shoulders above the rest because of his high level of enthusiasm, knowledge and genuine care for his students' learning."

Durham's "Concrete Frisbee Competition" every semester for undergraduates, where students design and construct flying discs made of concrete, is a class favorite. He promotes professional memberships for his students, learning outside the classroom and continuing education beyond graduation. He developed a program for training and certifying students to become ACI-Grade I Field Technician certified.

Sue Giullian, senior instructor in the School of Education and Human Development, has been on the faculty at UC Denver since 1997. She teaches courses in the Initial Teacher Preparation Program and has been active in course and program development for the program.

During the past three years, Giullian has taken on leadership roles related to her teaching responsibilities. She led other senior instructors in the development of draft policies and rubrics for the use of the Clinical Teaching Track faculty title series in SEHD. She has been active in the University of Colorado Denver Association of Lecturers and Instructors to ensure that non-tenure-track faculty members are supported and recognized for their contributions to the university.

A former student who is now a school principal wrote of Giullian: "As a cherished professional mentor, Sue has pushed me to recognize, reach and live my potential.  With every career advance, she has challenged my beliefs, stretched my limits and instilled confidence. I am the quintessential example of a professional deeply influenced by a talented and dedicated professor."

Giullian previously won the award in 2005.

Jan Mandel, professor in the Department of Mathematics and Statistical Sciences in the College of Liberal Arts and Sciences, is a leader in the field of multigrid and domain decomposition methods and is known for creative methods for developing ways for researchers to use massively parallel computational equipment. He has been with the university since 1986.

Since 2007, Mandel has published 13 refereed articles and 11 refereed and non-refereed conference proceedings. His publications since 2007 have received more than 1,700 citations in the ISI Citation Index. He has secured almost $4.5 million in external funding. Mandel was primary developer of WRF-Fire, the wildfire module in the Weather Research and Forecasting Model. Applications of this module also include hurricane assimilation, which is becoming the de-facto standard in numerical weather tracking.

A colleague wrote of Mandel, "The evidence is overwhelming that Jan is an extremely prolific researcher, with extensive publications in highly respected journals, and has generated a great deal of interest from funding agencies for his scientific work.  He exemplifies the concept of a world-class scholar."

Leo Bruederle, associate professor of integrative biology in the College of Liberal Arts and Sciences, has a strong record of service contributions both to the university and externally. He has been at UC Denver since 1994.

Since 2001, Bruederle has served continuously as associate chair or chair of integrative biology. He has been an integral part of the Auraria Science Building expansion, attending more than 40 meetings in 2009 alone, helping to organize the department's move earlier this year and everything in between. He is also deeply involved in the Colorado Native Plant Society, having served as board member; chair of publications and editor; Metro-Denver Chapter President; and Society President.

Bruederle has a long history of promoting undergraduate research at UC Denver. He has chaired the Undergraduate Research Opportunity Program and the Research and Creative Activities Symposium. He has engaged numerous students in research and has guided students in their peer mentoring of other students, both undergraduates and high school students from the Denver School of Science and Technology. His colleagues state, "Leo is one of the most committed faculty members I know. ... His activities within and outside of the university's walls advocate for the department, college, university and our students. His service is unquestionably outstanding."

Ignacio Ferrer-Vinent, science reference and instruction librarian and assistant professor, describes his main mission as advancing the university's educational and research goals by helping students, faculty and staff in the area of science. He develops instructional materials, offers individual consultations, responds to electronic queries, develops database tutorials and teaches library instruction classes to help patrons with their education and research endeavors. He has been at UC Denver since 2005.

Ferrer-Vinent contributes to the scholarship of his profession via presentations and published articles. The Auraria Library Faculty Personnel Committee, which selected Ferrer-Vinent for this award, applauded his superior performance and strong commitment to the library, the university, and the profession.

His peers state, "He has become our resident expert for databases such as SciFinder Scholar and is always willing to help our students understand and use this very difficult chemistry database....With his competence and patient assistance, he exhibits the best characteristics of our profession."

And also, "I never fail to feel impressed by the way (he) combines his thorough knowledge of science and excellent library science skills with warmth and humility."

Stephen Hartnett of the Department of Communications in the College of Liberal Arts and Sciences will be honored as the recipient of the universitywide Thomas Jefferson Award. This award is among the highest conferred at CU and recognizes a professor, staff member or student who helps advance the ideals of Thomas Jefferson.

Hartnett is a nationally recognized scholar who teaches Jefferson's texts and speaks about the president's legacy. He earned local and international recognition in 2008 for his participation in a UC Denver re-enactment of the 1858 senatorial debates between Abraham Lincoln and Stephen Douglas.

He has received the Northwestern Communication Association's 2008 Human Rights Award and has earned a national reputation as a successful prison educator. Hartnett was recognized by the Board of Regents at their April meeting last spring.

CLAS Dean Dan Howard wrote, "He is a scholar who strives to embody the democratic ideals, intellectual daring and artistic creativity that we have come to know and love as the legacy of Thomas Jefferson."

Send your thoughts and suggestions for the Newsletter.
END_OF_DOCUMENT_TOKEN_TO_BE_REPLACED