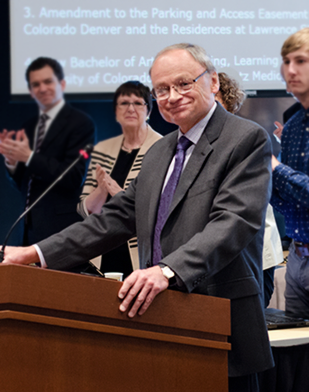 David L. Olds, Ph.D. – professor of pediatrics, nursing, psychiatry and public health at the University of Colorado School of Medicine – is the 2012-2013 recipient of the Chase Faculty Community Service Award.

Each year, a full-time CU faculty member who provides exceptional service to the community receives a $10,000 endowment, funded by a grant from Chase. A system-wide advisory council recommends an award-winner to CU President Bruce D. Benson, who bestows the honor. Olds was recognized by the CU Board of Regents at its Tuesday meeting on the University of Colorado Anschutz Medical Campus.

Olds directs the Prevention Research Center for Family and Child Health at CU, where he has been affiliated since 1993. He is founder of the Nurse-Family Partnership (NFP), a program providing home visits by nurses for first-time, low-income moms and their children. After studies determined the program improved maternal and child health, Olds led the program’s expansion into 41 states across the country.

More than 150,000 U.S. families have been served in the past 17 years by the NFP, which now is in development in countries around the world. It has been identified as the only early childhood program that meets the Coalition for Evidence-Based Policy’s “Top Tier” of evidence, and has served as the primary evidentiary foundation for a U.S. federal investment of $1.5 billion in evidence-based home visiting under the Affordable Care Act.

“Dr. Olds is not only a world expert in prevention science, but has taken his expertise and channeled it into the development of an exceptional prevention program that has, and will continue to, benefit hundreds of thousands of families worldwide,” wrote Heather Taussig, Ph.D., in the letter nominating Olds for the award. “His commitment to the provision of this efficacious program of prenatal and infancy home visiting for low-income families, without any financial gain, is the highest form of community service.”

Olds said he is “deeply honored to have my work acknowledged with this award.”

“It’s been a great privilege to support parents who’ve overcome often unbearable adversity to care well for their children and themselves,” Olds said. “And I’m honored to work with nurses in this mission.  They bring to this work incredible ingenuity and energy – because they’re committed to their core to making the world a better place for vulnerable children and families.”

In a nomination letter to the selection committee, Richard D. Krugman, M.D., dean of the University of Colorado School of Medicine, made note of Olds’ “extraordinary national and international reputation for his work to support the health and well-being of children and families throughout the world.”

“David is an outstanding citizen – of our university, of our community and of the world,” Krugman wrote. “He is thoughtful, measured in his approach, humble and incredibly hard working.”

“Supporting the annual recognition of an outstanding member of the Colorado community is great for all of us at Chase,” said Todd Munson, president of JPMorgan Chase in Colorado. “We’re especially proud to honor David Olds and his important work with new families.” 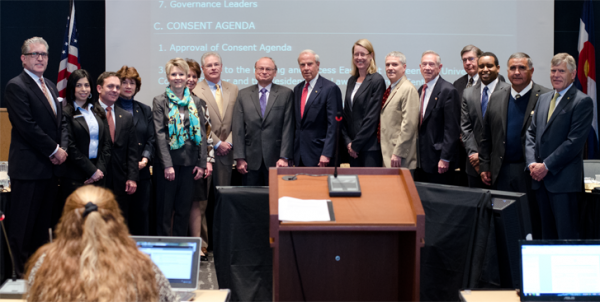 Tagged with:
awards, Board of Regents, School of Medicine