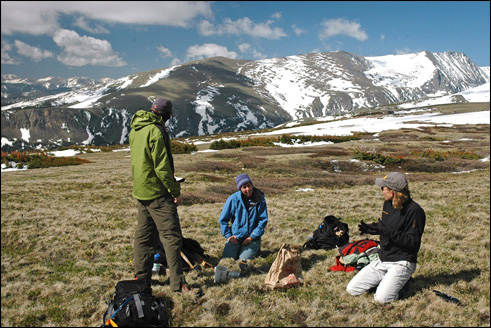 The National Science Foundation has awarded the University of Colorado Boulder a six-year, $5.9 million grant to continue intensive studies of long-term ecological changes in Colorado's high mountains, both natural and human-caused, over decades and centuries.

Awarded to CU-Boulder's Institute of Arctic and Alpine Research, the renewal grant will enable faculty and students, including undergraduates, to continue key environmental studies at the Niwot Ridge Long-Term Ecological Research, or LTER, site west of Boulder. The study site, considered extremely sensitive to climate change, is adjacent to CU-Boulder's Mountain Research Station and encompasses several thousand acres of tundra, talus slopes, glacial lakes and wetlands stretching to the top of the Continental Divide.

The grant is the largest environmental sciences award in CU-Boulder history, said INSTAAR Fellow Mark Williams, principal investigator on the grant. In 2005, NSF awarded CU-Boulder a $4.9 million renewal grant for environmental studies at the Niwot Ridge site. As one of five initial LTER sites selected by NSF in 1980, Niwot Ridge is now one of 25 such sites in North America and the only one located in an alpine environment, Williams said.

"CU-Boulder has a worldwide reputation for monitoring global climate change from Greenland to Antarctica and its impacts on natural ecosystems and human populations," said Stein Sture, vice chancellor for research. "To direct such a key program in our own backyard for the National Science Foundation is crucial from an environmental science standpoint and unique in that it provides a spectacular training ground for our students to work side-by-side with some of the world's best climate change scientists."

Recent climate studies have predicted the mountainous areas of the American West will become both hotter and drier in the coming years, and long-term meteorological measurements on Niwot Ridge indicate the alpine climate there has warmed slightly in recent decades, said Williams, also a professor in the geography department. The temperatures are significant because even small changes in alpine ecosystems can cascade downward and have negative effects on other ecosystems, he said.

CU-Boulder researchers also have charted a doubling in atmospheric nitrogen deposition on Niwot Ridge in the past several decades – primarily from automobile, agriculture, ranching and industrial activity – that is now adversely affecting some aquatic and terrestrial life on the ridge, Williams said.

In addition, researchers are keeping a close eye on existing populations of the American pika, a potato-sized animal related to rabbits and found in rocky talus slopes as high as 13,000 feet on Niwot Ridge. Of 25 populations of pikas in the Great Basin of Nevada documented between 1898 to 1990, nine had disappeared by 2008, apparently the result of warming temperatures. Pikas in Colorado require deep snowpack during winter that serves to insulate them from extremely cold air temperatures, Williams said.

"Many consider the American pika a 'sentinel species' in terms of measuring the effects of climate change," Williams said. "Niwot Ridge has a cold, short growing season, and the biological activity that occurs there is on the razor's edge of environmental tolerance."

Despite a long-term warming and drying trend in mountainous areas of the West, 2011 was a striking anomaly, Williams said.

"What we have seen around here is one of the largest and latest snowfall years on record in the high country and extreme dryness accompanied by an inordinate amount of winter wildfires around Boulder, which is only 15 miles as the crow flies from the Niwot Ridge study area," Williams said. "What has happened from Boulder west to the Continental Divide has been a total disconnect in terms of weather.

"The primary climate driver of the Niwot Ridge site is snow, and the mountains are our water towers. As the alpine climate changes, one of the biggest impacts on humans will be a change in water resources. Even if we end up with the same amount of precipitation, in the form of less snow and more rain, we are going to end up with less usable water for municipalities."

There already are some indications that the snowline in the Rocky Mountains is moving upward, which will affect the abundance and distribution of plants and animals and likely shorten the annual ski seasons at resorts throughout the West in the future, he said.

The Niwot Ridge site is a huge benefit to CU-Boulder students, Williams said.

"I have five undergraduates working in my chemistry lab this summer. Not only do they get paid, but they learn valuable research skills," he said. The LTER grant funds research for about 15 CU-Boulder graduate students and 25 to 30 undergraduates annually, and there are more than a dozen CU-Boulder faculty members who are co-investigators on the new Niwot Ridge LTER program grant.

CU-Boulder ecology and environmental biology department Professor William Bowman, director of CU-Boulder's Mountain Research Station for the past 20 years, said the Niwot Ridge site has been gaining momentum in stature from its beginnings by the consistent, high-quality research that has resulted in many publications in top-tier science journals.

More than half of the research on Niwot Ridge is by scientists and students from around the world who are not associated with the LTER program, said Bowman, also an INSTAAR fellow and who leads a team studying how air pollution, including nitrogen deposition, threatens biological and aquatic communities in U.S. national parks. There are 12 undergraduates conducting research at the Niwot Ridge site as part of the NSF's Research Experience for Undergraduates program, added Bowman, who also is mentoring a student researcher from Boulder's Fairview High School at Niwot Ridge.

Send your thoughts and suggestions for the Newsletter.
END_OF_DOCUMENT_TOKEN_TO_BE_REPLACED