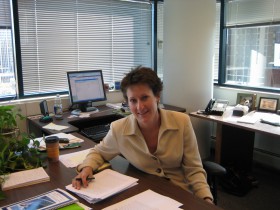 Inta Morris now leads the Colorado Department of Higher Education on an interim basis, following the resignation of David Skaggs.

Inta Morris is the new interim executive director of the Colorado Department of Higher Education. Gov. Bill Ritter announced the appointment on Friday, and Morris began the job on Monday. A graduate of the University of Colorado at Boulder, Morris is currently the assistant director for Interdepartmental and External Affairs at the department, and will serve in the interim role until a permanent replacement is selected.

"With her passion for connecting Coloradans with higher education, Inta will be a strong leader for our education system," Ritter said in a statement. "She is a constant engaging voice for higher education throughout the state, and will be a great interim director as we continue our search for a permanent replacement."

The vacancy came about after the August resignation of David Skaggs. According to recent reports in The Denver Post, Skaggs was at odds with the governor over "a matter which ... we could not agree," and with the state's college presidents over the length and timing of a planning study for Colorado's public colleges and universities. Some higher education leaders were concerned that the proposed study did not address significant revenue shortfalls, according to the reports.

The planning study, called the Colorado Higher Education Strategic Planning Initiative, was expected to start on Sept. 21 and take a year to complete, but has been postponed to a later date this fall.

"I want to thank David for his dedication to keeping college affordable and accessible, and for creating opportunities for Colorado students," Ritter said of Skaggs. "He continues to have a bright future, and I wish him well."

Morris, who earned a master's degree from George Washington University, has worked at DHE since July 2007. Previously she served as academic and political affairs officer for the Canadian Consulate General in Denver and as vice president of the U.S. Civilian Research and Development Foundation, a nongovernmental organization focused on fostering ties between the scientific and academic communities of the U.S. and countries of the former Soviet Union. She began her career working for then-Rep. David Skaggs, first as a member of his campaign staff and then as a legislative assistant in his congressional office.

James K. Galbraith, noted economist and former director of the Joint Economic Committee of Congress, will be the keynote speaker at the Coleman Institute for Cognitive Disabilities' ninth annual conference on Cognitive Disability and Technology.

Galbraith will talk about "Cognitive Disability, Inequality and Technology in an Age of Economic Uncertainty." He teaches at the Lyndon B. Johnson School of Public Affairs at the University of Texas at Austin, where he holds the Lloyd M. Bentsen Jr. Chair in Government/Business Relations. He has written several books, including last year's "The Predator State: How Conservatives Abandoned the Free Market and Why Liberals Should Too."

The Nov. 5 conference at the Westin Westminster Hotel also features Ann Turnbull and Rud Turnbull, both Distinguished University Professors at the University of Kansas. The Turnbulls are leading international figures in disability law, families, technology and special education.

CU faculty are invited to participate in conference research and demonstration poster sessions. One-page abstracts or statements describing one's work and how it relates to cognitive disability are due Oct. 5. The Word or PDF documents should be e-mailed to MaryEllen.Morse@cu.edu.

Registration for the conference is free, but limited to the first 300 registrants. For more information, including a detailed agenda, see the Coleman Institute's Web site.

Biotech, genetic research go under microscope at third Butcher Symposium
Seed grants of up to $100,000 available for faculty looking to collaborate

The Butcher Symposium returns for its third edition in November, again spotlighting interdisciplinary research related to genomics and biotechnology and offering seed money to faculty members looking to collaborate on such work.

As announced this week by CU President Bruce D. Benson and Leslie Leinwand, chief scientific officer of the CIMB, the symposium features Butcher awardees from 2007 delivering presentations about their work. To stimulate new collaborations, a poster session will run throughout the day, bringing together faculty in the many areas of research related to genomics and biotechnology. Lunch and a concluding reception round out the schedule.

Ten seed grants of up to $100,000 are available to support new collaborations. To be eligible, faculty members must register for and attend the symposium, and present a poster. Deadline for grant applications will be in early 2010. Abstracts for posters (200 words or fewer) and registration, which is free, are due Oct. 26. For details, go to the Butcher Symposium Web site.

Faculty from throughout the University of Colorado system are invited to apply for positions as investigators in the President's Teaching and Learning Collaborative (PTLC), the CU initiative now beginning its fourth year.

The PTLC has issued a call for proposed projects that will deepen student learning in higher education. Researchers selected will design, undertake and publish research on a specific aspect of learning in a particular course. Each investigator is supported by a coach and mentor and will benefit from a student research assistant.

The PTLC will focus on projects emphasizing student learning at any educational level, undergraduate and above. Projects should generate results during the 2010 academic year and accepted in a peer-reviewed journal or for presentation at a conference.

Applications must be submitted electronically to maryann.shea@colorado.edu no later than Oct.1.

The University of Colorado at Boulder will co-sponsor a candlelight vigil called HOPE Lights the Night: Remembering and Honoring Those Lost to Us by Suicide.

The event will be at 7:30 p.m. Thursday, Sept. 17, at the Boulder Band Shell, at Broadway Street and Canyon Boulevard. The vigil, hosted by the Hope Coalition of Boulder County, concludes a slate of recent events that took place during the 35th annual national Suicide Prevention Awareness Week, Sept. 6-12.

"CU-Boulder has about four to five students who die by suicide each year," said CU suicide prevention coordinator Amy Robertson. "Checking in with someone on their level of distress, no matter what your role is on campus, can, in and of itself, reduce the risk of someone dying by suicide."

Now serving his second term, Kefalas is on the appropriations, finance, and health and human services committees. He focuses on health care issues and is a frequent advocate of college students.