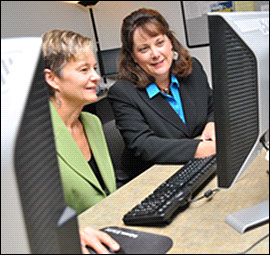 As traditional news media have cut coverage of health care and policy, the School of Public Affairs has stepped up to fill the void, creatingSolutions, a website and weekly electronic newsletter. The site, which debuts Dec. 1, presents health policy analysis, health care stories, opinions and research links in a way that most traditional media are no longer able to do.

"Our goal is to have a dramatic impact on policy by making people more well-informed so they are more effective advocates for their causes," said Diane Carman, photo left, director of communications for the school. "We won't be pushing an agenda and we're not advocates. Our goal is to provide the information."

Two years ago, Robert Reichardt, director for the Center of Education Policy Analysis, suggested the school consider developing a website to explain public policy issues. Reichardt based his idea on Education News Colorado, a website devoted to comprehensive coverage of the state's education policymaking. Dean Paul Teske applauded the plan.

Carman discussed the concept with community leaders and found that a need existed when it came to providing unbiased information surrounding health care policy. The number of journalists covering health issues in the state had declined dramatically and most reports focused on the political dance instead of analysis that would educate an often-confused public.

During the recent health care reform debate, for example, newspapers — even well-respected national publications — spent a majority of the time reporting the political ramifications of reform.

"It was the rare person who understood anything about what was involved in that bill and the impact it would have on Colorado's economy, people's lives, the insurance industry or being a practitioner in this state," Carman said. Even today, because the specifics of reform are under-reported, political ads are able to distort the truth because citizens don't understand the new law.

Solutions is a "source of information that is focused on health policy itself — not merely the politics of it — and what it means and how it works," Carman said. "That way, we begin to elevate the conversation and make the debate in our state legislature and in casual conversations a better informed one."

She developed a project prototype last year and pursued funding. The Colorado Health Foundation and the Piton Foundation are providing a majority of the program's dollars, while the university is providing considerable in-kind support.

"Health policy impacts all of our lives; it intersects with every other public policy issue," McCrimmon said. "I believe nonprofit journalism is our future, and if we want serious coverage of serious issues, we have to find new models. We are pioneers."

Both Carman and McCrimmon are veteran journalists. Carman spent more than 30 years as a reporter, editor and columnist before joining the School of Public Affairs in 2007.

McCrimmon recently worked as health policy writer for the Colorado Trust. Previously, she was an awarding-winning reporter for the Rocky Mountain News.

The site focuses on issues relevant to the state and Rocky Mountain West, along with national issues that have implications for Colorado citizens. Topics include the state's high suicide rate and its rate of low birth-weight babies, the continuing struggle to ensure all children are immunized and the increasing awareness of physical damage caused by repeat concussions.

Carman emphasizes that Solutions is a journalistic endeavor, not an academic one, and that the school is responding to the crucial need for accountability news coverage of health policy issues.

"Paul Teske is behind this as a news medium that will have integrity and value, and he believes the independence of the reporters and writers is critical," she said.

Send your thoughts and suggestions for the Newsletter.
END_OF_DOCUMENT_TOKEN_TO_BE_REPLACED