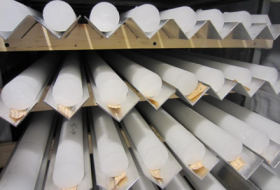 A new study by an international team of scientists analyzing ice cores from the Greenland ice sheet going back in time more than 100,000 years indicates the last interglacial period may be a good analog for where the planet is headed in terms of increasing greenhouse gases and rising temperatures.

The new results from the NEEM deep ice core drilling project led by the University of Copenhagen and involving the University of Colorado Boulder show that between 130,000 and 115,000 years ago during the Eemian interglacial period, the climate in north Greenland rose to about 14 degrees Fahrenheit warmer than today. Despite the strong warming signal during the Eemian -- a period when the seas were roughly 15 to 25 feet higher than today -- the surface of the north Greenland ice sheet near the NEEM facility was only a few hundred yards lower than it is today, an indication to scientists it contributed less than half of the total sea rise at the time.

The NEEM project involves 300 scientists and students from 14 countries and is led by Professor Dorthe Dahl-Jensen, director of the University of Copenhagen’s Centre of Ice and Climate. CU-Boulder geological sciences professor and ice core expert Jim White is the lead U.S. investigator on the project.  The National Science Foundation’s Division of Polar Programs funded the U.S. portion of the effort.

A paper on the subject was published in the Jan. 24 issue of Nature.

“When we calculated how much ice melt from Greenland was contributing to global sea rise in the Eemian, we knew a large part of the sea rise back then must have come from Antarctica,” said White, director of CU-Boulder’s Institute of Arctic and Alpine Research. “A lot of us had been leaning in that direction for some time, but we now have evidence that confirms that the West Antarctic ice sheet was a dynamic and crucial player in global sea rise during the last interglacial period.”

Dahl-Jensen said the loss of ice mass on the Greenland ice sheet in the early part of the Eemian was likely similar to changes seen there by climate scientists in the past 10 years. Other studies have shown the temperatures above Greenland have been rising five times faster than the average global temperatures in recent years, and that Greenland has been losing more than 200 million tons of ice annually since 2003. The Greenland ice loss study was led by former CU-Boulder scientist Isabella Velicogna, who is currently a faculty member at the University of California, Irvine.

The intense melt in the vicinity of NEEM during the warm Eemian period was seen in the ice cores as layers of re-frozen meltwater.  Such melt events during the last glacial period were rare by comparison, showing that the surface temperatures at the NEEM site were in a cold, nearly constant state back then. But on July 12, 2012, satellite images from NASA indicated 97 percent of Greenland’s ice sheet surface had thawed as a result of warming temperatures.

“We were quite shocked by the warm surface temperatures observed at the NEEM ice camp in July 2012,” said Dahl-Jensen. “It was raining at the top of the Greenland ice sheet, and just as during the Eemian period, meltwater formed subsurface ice layers. While this was an extreme event, the present warming over Greenland makes surface melt more likely, and the predicted warming over Greenland in the next 50-100 years will very likely be so strong that we will potentially have Eemian-like climate conditions.”

The Greenland ice core layers -- formed over millennia by compressed snow -- are being studied in detail using a suite of measurements, including stable water isotope analysis that reveals information about temperature and greenhouse gas levels and moisture changes back in time. Lasers are used to measure the water stable isotopes and atmospheric gas bubbles trapped in the ice cores to better understand past variations in climate on an annual basis -- similar in some ways to a tree-ring record.

The results from the Nature study provide scientists with a “road map” of sorts to show where a warming Earth is headed in the future, said White.  Of the nine hottest years on Earth on record, eight have come since the year 2000.  In 2007 the Intergovernmental Panel on Climate Change concluded that temperatures on Earth could climb by as much as 11 degrees F by 2100.

Increasing amounts of carbon dioxide in the atmosphere from sources like vehicle exhaust and industrial pollution -- which have risen from about 280 parts per million at the onset of the Industrial Revolution to 391 parts per million today -- are helping to raise temperatures on Earth, with no end in sight, said White.

“Unfortunately, we have reached a point where there is so much carbon dioxide in the atmosphere it’s going to be difficult for us to further limit our impact on the planet,” White said.  “Our kids and grandkids are definitely going to look back and shake their heads at the inaction of this country’s generation. We are burning the lion’s share of oil and natural gas to benefit our lifestyle, and punting the responsibility for it.”

In the past, Earth’s journey into and out of glacial periods is thought to be due in large part to variations in its orbit, tilt and rotation that change the amount of solar energy delivered to the planet, he said. But the anthropogenic warming on Earth today could override such episodic changes, perhaps even staving off an ice age, White said.

While three previous ice cores drilled in Greenland in the last 20 years recovered ice from the Eemian, the deepest layers were compressed and folded, making the data difficult to interpret.  Although there was some folding of the lowest ice layers in the NEEM core, sophisticated ice-penetrating radar helped scientists sort out and interpret the individual layers to paint an accurate picture of the warming of Earth’s Northern Hemisphere as it emerged from the previous ice age, White said.

In addition to White, other CU-Boulder co-authors on the NEEM paper include INSTAAR scientist Bruce Vaughn and graduate student Tyler Jones of INSTAAR and CU-Boulder’s Environmental Studies Program.

“It’s a challenge being on the ice sheet, because we are out of our comfort zones and are working long, physical hours in an environment that is extremely cold and where the sun never sets,” Jones said.  “Being a member of the research team allowed me to understand the ice core recovery process and the science behind it in terms of learning more about past climates and the implications for future climate change.”

Other nations involved in NEEM include Belgium, Canada, France, Germany, Iceland, Japan, Korea, the Netherlands, Sweden, Switzerland and the United Kingdom. Other U.S. institutions involved in the effort include Oregon State University, Penn State, the University of California, San Diego and Dartmouth College.

Tagged with:
Institute of Arctic and Alpine Research, research