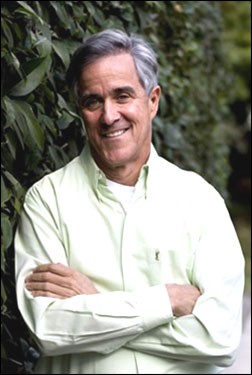 The Presidents Leadership Institute's new executive director, Steve Grace, was on campus only a few days before firing up his students to begin a community engagement effort called CU Stands With Haiti.

The Monday after the Haiti earthquake, Grace
e-mailed some of the Presidents Leadership Class (PLC) students he had met, saying, "I have some ideas about how, as a group, we might help with efforts to raise funds here on campus and would love to brainstorm with you. This would give the campus a great voice in the Haiti relief efforts. Want to help?"

They did. Within a few days, Grace and the students had obtained support from Vice Chancellor of Student Affairs Julie Wong and Chancellor Phil DiStefano. Grace stepped aside and his students took charge.

Senior psychology major Mark Arnoldy and junior film major Brett Forrest spearheaded the campus campaign that netted $100,000 in disaster relief in a little over a month. "PLC students do a lot at CU-Boulder," Grace said. "They are ready to pitch in to be a unifying force on this campus."

"Steve Grace has made a tremendous impact on the program and CU in general," Forrest said. "He has provided great mentorship and helped set Mark Arnoldy and me in the right direction with the CU Stands With Haiti campaign. I look forward to seeing the impact Steve will have in the near future and how far he can take PLC."

Grace has more than 25 years of experience in nonprofit management, broadcast journalism and academia, areas of expertise that dovetailed in his decision to come to CU-Boulder. "I've been a person who has lived my career in 7- to 10-year chunks," he said. "I have many different skill sets, but it was the combination of nonprofit and academia that really made this opportunity seem like a great fit."

For more than six years he served as president of the nonprofit Los Angeles Cable Television Access Corporation and as general manager of the largest educational cable access channel in the United States. During his tenure he raised more than $2 million in grants and production fees, and built closer ties to the community and local colleges and universities. One of his favorite parts of the job was "going to the campuses, meeting the deans, meeting the students," he said. "The whole life of a campus is just so inspiring to me."

When Grace's two daughters went away to college, he became a member of the adjunct faculty at California State University Los Angeles in the communication studies department, where he specialized in new media and technology.

Earlier in his career, Grace worked in television as a producer with the "Today" show, traveling around the world to produce segments and programs for NBC News. He also was a founding partner of Popular Arts Entertainment, one of the largest independent entertainment news production groups in the United States. Grace began his broadcasting career at WQED-TV in Pittsburgh working on everything from "Mr. Roger's Neighborhood" to the "National Geographic" series.

As executive director of PLI, Grace reports to Associate Vice Chancellor for Undergraduate Education Michael Grant, as well as to the board of directors of PLI. Grace says that Grant has encouraged him to look at what else PLC can be — to grow PLC, and to think more broadly.

"PLI can be much more. That's the challenge and the opportunity for me now," Grace said. "I want us to play a wider day-to-day role on campus than just affecting our 200 students."

Send your thoughts and suggestions for the Newsletter.
END_OF_DOCUMENT_TOKEN_TO_BE_REPLACED