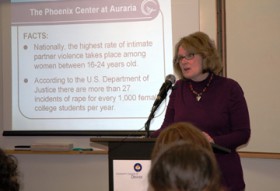 Kathy Robertson, whose daughter was a student at Metro State when she was killed by her former boyfriend, speaks at the opening of the Phoenix Center at Auraria. The center provides support to students who may be threatened by dating violence.

Interpersonal violence is a national issue for college students, especially college-aged women. But the Phoenix Center at Auraria hopes to help eradicate it on the Auraria Campus, the largest campus in the state with more than 43,000 students.

The Phoenix Center at Auraria, which opened last month, serves students, faculty and staff at all three campus institutions: the University of Colorado Denver, Metropolitan State College of Denver and Community College of Denver, as well as staff at the Auraria Higher Education Center (AHEC). Goals of the Phoenix Center at Auraria include establishing victim services, increasing offender accountability, coordinating campus response to incidents of interpersonal violence, and developing prevention and awareness activities.

Kathy Robertson knows the importance of having a place on campus where students can go for help dealing with dating violence, stalking, sexual assault and domestic violence. She lost her daughter to dating violence in 2007.

"As a mother of a college student who was tragically taken from this world by dating violence, I know the consequences of being uninformed about issues facing young adults today," said Robertson, whose daughter, a student at Metro State, was killed by her former boyfriend, also a Metro State student. "The Phoenix Center at Auraria will help these young men and women on the Auraria Campus have a safe environment to go to when they feel that they are in danger or in need of confidential relationship advice."

The Phoenix Center at Auraria was funded by U.S. Department of Justice grant money — $500,000 over three years — awarded in November 2008 to the Center on Domestic Violence in the School of Public Affairs at UC Denver. The money was given to develop a program for prevention of domestic violence, dating violence, sexual assault and stalking on the Auraria Campus.

While interpersonal violence centers are not unusual on university campuses, the Phoenix Center at Auraria is special in that it provides services to staff, students and faculty across three institutions of higher education, as well as AHEC. The three Auraria Campus institutions applied for the grant money in tandem.

"An end to domestic violence can be modeled on our campuses and the Phoenix Center at Auraria will be a big part of making that dream a reality," said M. Roy Wilson, chancellor of UC Denver. "The center will be critical to enhancing our understanding of how we can all contribute to end the interpersonal violence so prevalent in our communities today."

The Phoenix Center at Auraria offers a 24-hour confidential helpline (303-556-CALL or -2255), victim support, advocacy and other services. It also will conduct high-profile programming to raise overall understanding among students, faculty and staff of sexual assault, stalking, dating and domestic violence on campus. The center also utilizes student volunteer violence-prevention educators who conduct peer-to-peer education, operate booths and tables at Auraria events, distribute literature and increase visibility of the issue on campus.