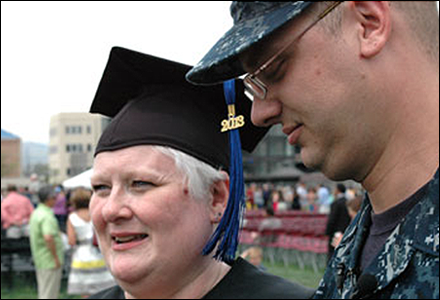 The bear hug between the mom in a cap and gown and son in Navy fatigues went on for more than a minute. Zac Drake, stationed in Japan, hadn't seen his mother, Beth Rozinek, in 18 months.

He surprised her by flying in for her graduation. Spring Commencement took place Saturday morning under sunny skies on the Auraria Fields. More than 1,900 University of Colorado Denver graduates, many of them non-traditional students like Rozinek, received degrees.

Drake stood at the edge of the crowd and beamed as his mom's name was read over the loudspeaker. "Granted, I was way in the back, but I could still see her on the giant TV up there," he said. "I'm extremely proud."

After the ceremony, Rozinek's other three sons, her husband, mother and other relatives watched as Drake appeared from behind a row of port-a-pottis. She was speechless. All she could do was embrace him in long hug.

"Overwhelmed. Excited. Happy," she said. "It's overwhelming whenever I see him. I can't even explain it. It just brings everything out. And here with all of his brothers, it's just so important to all of us."

Drake kept his plans a secret, but a snafu at the Chicago airport almost unraveled the plot. Going through security, his computer was inadvertently picked up by another traveler. Upon discovering the mistake, the person contacted the last person Drake had emailed -- his mother. So even though Rozinek learned that Zac was in the States, he covered his tracks by saying he'd been sent to his new station in Virginia a couple weeks early.

She said that earning a bachelor of science degree in business administration at age 50 is "pretty surreal." Rozinek, who already had an associate's degree, began her journey toward a bachelor's five years ago. In her first class at CU Denver was a student who had graduated with Drake at Fort Lupton High School.

Drake said his mother spent all her time raising her family. "I'm so proud of her," he said. "Dealing with kids, school, work -- trying to get it all in. I don't have any words to express how happy I am for her."

Rozinek's mother, Kathy Dorris, said she suspected her grandson might pull off a surprise at commencement. "I wouldn't have been surprised if he'd gone to give her the diploma up there," she said. "I was half expecting him to pull off something like that."

Rozinek said she'd like to work in human resources, explaining benefit plans to employees. Her immediate plans are just to spend time with her family.

"It's a journey and a struggle," she said. "Especially as an older student, going back and saying, 'Oh my gosh, I haven't done this in so long.' It's very different than it was (the first time). But it's been a great learning experience."

An active and supportive member of the CU Denver Alumni Association, he served two terms on its board from 1998 through 2012, playing a vital role in the organization’s success. He worked on several committees and held the chair, vice president and president positions for the association. He served on the University of Colorado Foundation Board of Trustees as alumni liaison from 2010 to 2012, and in 2007 was named outstanding volunteer of the alumni association.

Rep. Duran has served on the Judiciary, State Veterans & Military Affairs and Legislative Council committees in the state’s General Assembly. She currently serves on the Appropriations and the Joint Budget Committees. As a member of the Joint Budget Committee, Rep. Duran supported the supplemental 2013 budget request to bring additional funding to higher education institutions. Rep. Duran agreed to fund the Auraria Campus’ controlled maintenance projects during the 2013 session, including sprinkler installation and Americans with Disabilities Act improvements to the Tenth Street Pedestrian Corridor. She also strongly advocated for $4 million for the Auraria Library renovation project, which passed successfully, and she sponsored the ASSET legislation, the measure making undocumented students eligible for resident tuition rates at state colleges and universities.

At age 30, Rep. Duran became the youngest Latina ever elected to the Colorado House of Representatives, with more than 76 percent of the votes.

A 2008 graduate of CU Denver with an MA in political science, Sugar began creating her nonprofit organization and microfinance model while still in school — developing ideas into projects for her courses, hiring local staff in Uganda, and implementing the pilot project. She crafted her program based on existing research on microfinance and after talking to a number of experts in the field.

Several aspects of WGEF make it stand out from other grassroots microfinance projects. It provides a social and political dimension, focusing on literacy, leadership development and health initiatives. It also includes a peer counseling program that works with borrower groups who are having difficulties.

To repay the support she received from CU Denver, Sugar has also sponsored numerous CU Denver interns working with WGEF, giving them a chance to learn about development, Africa and what it’s like to run an international nongovernmental organization. In addition, she continues to come back to lecture and share her experiences with students.