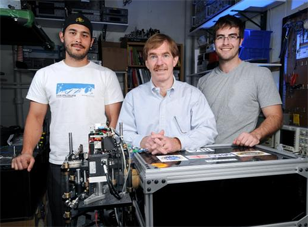 A new national report highlighting the success of 100 university spinoff companies tracing their roots to federally funded research includes two companies that sprang from cutting-edge research at the University of Colorado Boulder.

The report, “Sparking Economic Growth 2.0: Companies Created From Federally Funded Research, Fueling American Innovation and Economic Growth,” was released by the Science Coalition, a nonprofit, nonpartisan organization of more than 50 of the nation’s leading public and private research universities, including CU-Boulder.

“The federal investment to basic research activity at CU-Boulder and other universities around the nation has resulted in thousands of key discoveries and the development of hundreds of spinoff companies in fields like biotechnology, engineering, energy and biomedicine,” said CU-Boulder Chancellor Philip P. DiStefano. “America’s prosperity depends on the innovations and job creation spurred by basic research, and in order to continue on this path we need to secure continued federal funding for economic reasons, and to inspire the next generation of scientists.”

The Science Coalition is dedicated to sustaining the federal government’s investment in basic scientific research as a means to stimulate the economy, spur innovation and drive America’s global competitiveness. The two Boulder startup companies highlighted in the report are ColdQuanta and LineRate Systems.

ColdQuanta grew out of decades of research by CU-Boulder Professor Dana Anderson and his work at JILA, a collaboration of CU-Boulder and the National Institute of Standards and Technology, to make ultracold-matter systems simpler, more compact and more practical through the applied research development of atom chip technology. Atom chips provide a means to substantially simplify the production of ultracold matter and provide a standardized pathway for developing practical ultracold matter-based sensors.

“Federally supported university research has enabled Nobel–caliber discoveries in ultracold matter science to emerge as a far-reaching technology likely to have impacts comparable to the laser,” Anderson said. “University spinoff companies like ColdQuanta play a key role by placing groundbreaking technology into the hands of the innovators, the applications engineers and the developers, who give life and substance our nation’s high-tech economy.”

The core technology for LineRate Systems, which helps companies scale their network services to support growing Web traffic, grew out of John Giacomoni’s research as a graduate student at CU-Boulder studying high-performance network systems and design. Formed in 2008 by Giacomoni and former CU-Boulder computer science Assistant Professor Manish Vachharajani, LineRate Systems was acquired by F5 Networks this year for $125 million. Funding from the Department of Defense also helped support some of Giacomoni’s research.

“I believe that serendipitous foundational inventions resulting from federally funded projects are a vital link in the engine driving American innovation,” said Giacomoni, CTO of LineRate Systems. “The reason is that with all serendipitous inventions, including the Internet and the technologies driving LineRate Systems, one cannot predict a priori the impact of a federally funded project but the economic impact has been vital.”

According to Science Coalition administrators, the basic science research behind LineRate, ColdQuanta and other startups is jeopardized by the current federal funding environment. Federal research and development has been on a downward trend for the past decade, with funding levels in 2013 at historic lows. Sequestration, which began in March 2013, is set to continue through 2021 and will remove an additional $95 billion from federal research budgets over that period.

“This report demonstrates the power of the federal investment in basic scientific research,” said Science Coalition President Tim Leshan. “While research is only a small portion of the overall federal budget, the results are huge: discoveries with profound implications for our health, safety and quality of life; training for future generations of scientists, doctors and teachers; and innovations that give birth to new technologies, companies and industries.

“If America wants to maintain its innovative edge, create meaningful jobs and realize economic growth, then we must ensure that funding for scientific research is prioritized, even in times of cost-cutting.”

The new Science Coalition report, as well as university startup company success stories, is available at www.sciencecoalition.org/successstories. An accompanying database provides access to company profiles and allows users to sort companies by federal funding agency, university affiliation, type of innovation and other criteria.