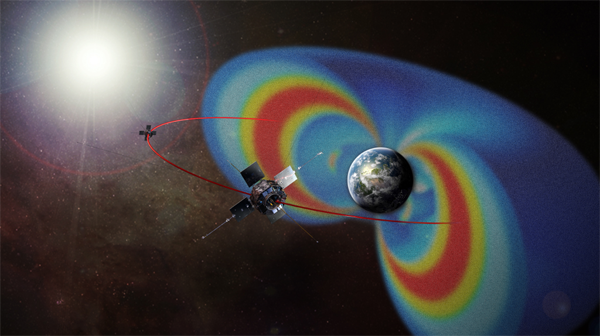 Using data from a NASA satellite, a team of scientists led by the Los Alamos National Laboratory in New Mexico and involving the University of Colorado Boulder have discovered a massive particle accelerator in the heart of one of the harshest regions of near-Earth space, a region of super-energetic, charged particles surrounding the globe known as the Van Allen radiation belts.

The new results from NASA's Van Allen Probes mission show the acceleration energy is in the belts themselves. Local bumps of energy kick particles inside the belts to ever-faster speeds, much like a well-timed push on a moving swing. Knowing the location of the acceleration within the radiation belts will help scientists improve predictions of space weather that can be hazardous to satellites near Earth. The results were published July 25 in the journal Science.

“Until the 1990s, we thought the Van Allen belts were pretty well-behaved and changed slowly,” says Geoff Reeves, lead author on the paper and a radiation belt scientist at Los Alamos National Laboratory. “With more and more measurements, however, we realized how quickly and unpredictably the radiation belts change. They are basically never in equilibrium, but in a constant state of change.”

In order for scientists to understand such changes better, the twin Van Allen Probes fly straight through this intense area of space. One of the top priorities for the mission, launched last August, is to understand how particles in the belts are accelerated to ultra-high energies.

“We see case after case where the very high energy electrons appear suddenly right in the heart of the outer belt,” said CU-Boulder Professor Daniel Baker, director of the Laboratory for Atmospheric and Space Physics and a study co-author. “But now we can prove where the electrons originate from and we can see the waves – and the lower energy ‘seed’ particles – from which the relativistic electrons grow. We can essentially peer into the inner workings of our local cosmic accelerator with unprecedented clarity.”

Physics dictates particle speeds in this scenario will increase as the magnetic field strength increases. The speed of the particles would increase as they move toward Earth, much the way a rock rolling down a hill gathers speed because of gravity. The local acceleration theory proposes the particles gain energy from a local energy source, similar to the way warm ocean water can fuel a hurricane above it.

Reeves and his team found they could distinguish between these two theories when they observed a rapid energy increase in the radiation belts Oct. 9, 2012. The observations did not show an intensification in particle energy starting at high altitude and moving gradually toward Earth, as would be expected in a radial acceleration scenario. Instead, the data showed an increase in energy that started right in the middle of the radiation belts and gradually spread both inward and outward, implying a local acceleration source. The research shows this local energy comes from electromagnetic waves coursing through the belts, tapping energy from other particles residing in the same region of space.

“These new results go a long way toward answering the questions of where and how particles are accelerated to high energy,” said Mona Kessel, Van Allen Probes program scientist in Washington. “One mission goal has been substantially addressed.”

The challenge for scientists now is to determine which waves are at work, according to the science team. The Van Allen Probes, which are designed to measure and distinguish between many types of electromagnetic waves, will tackle this task, too.

Baker said the new findings would not have been possible without the Relativistic Electric Proton Telescope, or REPT, developed by a team at CU-Boulder’s LASP that is riding on the Van Allen Probes.  CU-Boulder will receive more than $18 million from NASA during the Van Allen Probes mission lifetime for REPT and an electronics package known as the Digital Fields Board, said Baker, who led the LASP team that developed REPT.

“We are now getting a crash course in true radiation belt physics,” Baker said. “While before we were nibbling at the edges or looking through a cloudy screen, things are incredibly clear now. With our beautiful new sensors, we can see almost every ‘thumbprint’ of every large solar storm that has impressed itself on the Earth’s radiation belts.”