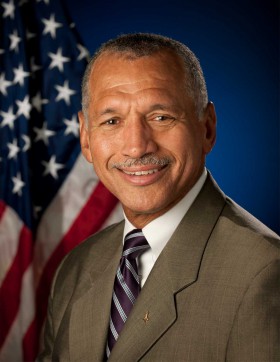 NASA Administrator Charles Bolden will give a free public talk Friday at CU-Boulder, speaking on America’s space program and the challenges and opportunities the space agency will encounter as it moves through the 21st century.

The talk, titled “NASA’s Roadmap to Tomorrow’s Missions,” will be at CU-Boulder’s East Stadium Club on the east side of Folsom Field from 2:45 p.m. to 3:30 p.m. The presentation will be followed by a question-and-answer session with the audience.

Because seating for the CU-Boulder event is limited, those who would like to attend must register at http://bit.ly/NASA-Bolden-CU.

CU-Boulder is the No. 1 public university in the nation in NASA funding, with nearly $500 million in sponsored research awards from the space agency in the past decade. LASP currently is involved with a number of NASA planetary and solar science missions, including spacecraft now en route to Mars, Jupiter and Pluto, as well as a $32 million instrument package flying on NASA’s Solar Dynamics Observatory to help scientists better understand and mitigate damage from severe space weather.

CU-Boulder’s Center for Astrophysics and Space Astronomy designed a $70 million instrument now flying on the Hubble Space Telescope to gather information from ultraviolet light emanating from distant objects, allowing scientists to look back in time and space and reconstruct the physical condition and evolution of the early universe.

The Cooperative Institute for Research in Environmental Sciences, or CIRES, a joint venture of CU-Boulder and the National Oceanic and Atmospheric Administration, has been involved with NASA on a number of collaborative research efforts. NASA chose the CIRES/CU-Boulder National Snow and Ice Data Center, for example, to manage the nation’s data on sea ice, ice shelves, ice sheets and snow cover, data often critical for decision makers. Water managers and farmers in the arid West, for example, rely on up-to-date snowpack conditions, since melting snow feeds thirsty cities and crops.

In 2013, CU-Boulder led a NASA airborne science campaign staged out of Houston using satellites, a NASA DC-8 airliner, jets and ground-based instruments that probed weather patterns and air pollution over a vast expanse of North America that have potential global climate consequences. The campaign also involved CIRES, NOAA, the National Center for Atmospheric Research and 15 universities, including CU-Boulder, Harvard, the California Institute of Technology and the University of Innsbruck.

Bolden, who has been the NASA administrator since 2009, has overseen the transition from 30 years of space shuttle missions to a new era of exploration focused on the space station and the development of space and aeronautics technology. During his tenure, NASA has made significant progress toward returning to launching astronauts from American soil, which is now expected to occur by 2017.

A retired major general, Bolden had a 34-year career with the Marine Corps, including 14 years as a member of NASA’s Astronaut Office, flying four space shuttle missions to the space station during that period.

NASA’s $671 million MAVEN mission to Mars, led by LASP and launched in November 2013, is slated to slide into Mars orbit in September to begin gathering data about how the planet’s climate changed, where its water went and what happened to its atmosphere during the past several billion years.