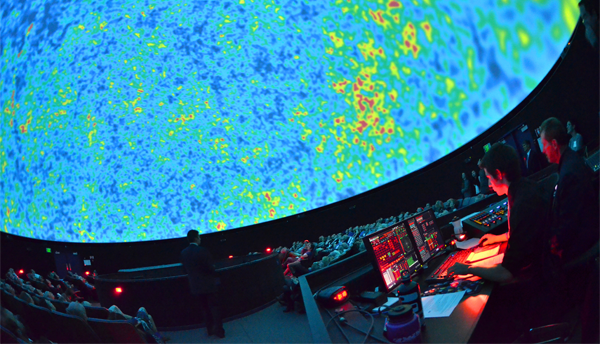 Sky gazers will be better immersed in spectacular views at the University of Colorado Boulder’s Fiske Planetarium since the dome’s nearly 40-year-old analog projector was replaced with a new digital “star ball” in a project completed last week.

The modernized Fiske, which now can show a wider range of media including ultra high-definition movies, reopened to the public Saturday.

“Just like movie or IMAX theaters, Fiske will show a variety of programs for adults and children,” said Doug Duncan, director of Fiske. “We’ll be open to the public every weekend and some evenings while still serving college and K-12 students in classes Monday through Friday.”

In addition to movies and space odysseys, the planetarium will continue to offer its popular series of laser shows.

The new star ball can display up to 20 million individual stars -- a vastness not fully visible to the naked eye.

“The naked eye can see about 6,000 stars,” said Duncan, who also is a CU-Boulder research associate in astrophysical and planetary sciences. “Our new projector is so powerful that you can use binoculars inside the planetarium to see millions of stars and the beautiful Milky Way.”

“The size and quality is the equivalent of 40 Blu-ray players projecting 40 sections of one video image at once,” Duncan said.

All regular shows will include a live demonstration of the capabilities of the new Fiske, showing the stars and flying visitors through the universe.

“Just like at an IMAX theater, we can take you near a black hole, through the Grand Canyon, under the ocean, or up to a super volcano,” Duncan said. “The sky is no longer the limit.”

Featured today through Sunday are “Black Holes,” “Supervolcanoes,” and “Moons and Lasers” -- a family show -- as well as laser shows set to everything from the music of AC/DC to Lady Gaga. Tickets range from $7 to $10.

Fiske, which offers some programs in Spanish, is the largest planetarium of its kind between Los Angeles and Chicago. The technology upgrade project -- the first of its extent at Fiske since the planetarium was established in the early 1970s -- has been underway since January 2013.

“I’ve been to several of the most beautiful sky gazing sites in the world, from Hawaii to Chile,” Duncan said. “Fiske is the only indoor planetarium that I’ve seen that makes me feel like I’m really out there.”

For more information about Fiske Planetarium, including schedules, visit http://fiske.colorado.edu or call 303-492-5002.

Get ready for solar eclipse with free online course

Send your thoughts and suggestions for the Newsletter.
END_OF_DOCUMENT_TOKEN_TO_BE_REPLACED