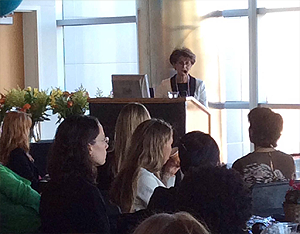 Representing all four campuses and system administration, attendees convened at the CU Anschutz Medical Campus to take advantage of opportunities for professional development, career support and networking with colleagues.

Friday’s daylong slate of presentations and group discussions led off with a welcome by Richard Krugman, dean of the CU School of Medicine, who introduced the event’s keynote speaker: Lilly Marks, vice president for health affairs for the University of Colorado and executive vice chancellor of the Anschutz Medical Campus.

Marks shared advice and lessons learned from her groundbreaking career, which took root in business school at CU-Boulder, where she majored in finance.

“This was not my intended path in life,” Marks said. “I was really convinced I wanted to go into business. … I never considered going into higher education administration.”

When her husband’s pursuit of a law degree led the family to the University of Virginia, she said, “I had no opportunities to pursue the career that I had started.” She said taking a job as grants manager at the University of Virginia’s medical school “was a giant U-turn in my career.” Her time in that role produced an epiphany: Her rare skill set was lacking in her new environment, and the growing field of health care economics would create greater demand for her abilities.

“That’s my first lesson, that sometimes life and your career take very unexpected turns,” Marks said. “You need to have a vision of how you’ll adapt.”

Marks said she’s committed to the issues of women’s professional development, and acknowledged overcoming gender prejudices in her career.

“But gender hasn’t been the biggest issue: The hardest accomplishment for me was climbing the leadership ladder in academic medicine,” Marks said. “I’m one of only three or four women who lead an academic medical campus around the country, and I’m the only person in that role – man or woman – who is not a physician or scientist.

“Gaining credibility and acceptance when you aren’t an exclusive member of that club, by gender or credentials, has been one of my biggest challenges.”

Some of the nuggets of advice delivered by Marks: 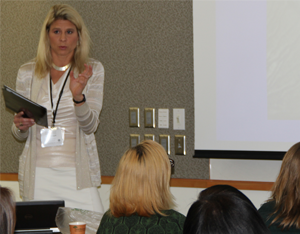 Besides sharing professional advice, Marks also spoke movingly of her family, including her parents, both natives of Poland who survived the Holocaust before coming to America. Her father, who lost his parents and siblings in the Holocaust, died this year at age 98; one of her infant grandsons now bears his name, Samuel.

“I’ll always remember this advice from my father – ‘Lilly, you can’t be a victim. Don’t think of yourself as a victim,’” she said. “People face enormous challenges in their lives. … What defines you are not the challenges that confront you, but how you respond.”

Mentoring in focus: A recurring theme throughout the day’s presentations and discussions, mentoring provided a focal point for much of the give and take.

Marks credited the dean of the School of Medicine for his role in her career. “I have been extraordinarily blessed to work with Dick Krugman for two decades,” she said. “He’s been a wonderful mentor.”

And Marks, in turn, was mentioned by Eva Aagaard, M.D., FACP, who received the Elizabeth D. Gee Memorial Lectureship Award. It honors an outstanding CU faculty member for efforts to advance women in academia, interdisciplinary scholarly contributions and distinguished teaching.

“I recently asked Lilly Marks to be my mentor,” Aagaard said during a breakout session on the mentor-mentee relationship. “We were talking awhile, and she asked me, ‘Is this worthwhile for you?’ I said, ‘Are you kidding? You have no idea how valuable this is.’”

Aagaard defined a mentor as “someone you have a relationship with – it’s longitudinal, and often considered to be reciprocal. We both get something from the relationship, including just the joy potentially of seeing someone grow.”

Aagaard is assistant dean for Lifelong Learning, director of the Academy of Medical Educators and director of Faculty Development in the Division of General Internal Medicine at the University of Colorado School of Medicine. She said, “success is not an individual support,” noting she has benefited from the support of numerous mentors and of her husband of 23 years.

Aagaard helped lead the mentor-mentee session with Judith Regensteiner, Ph.D., who also took part in a later panel discussion on mentoring, co-led by Carol Rumack. Regensteiner, professor of medicine in the Division of Cardiology in the School of Medicine, also is director of the Center for Women’s Health Research.

“Seeing these events, having all these women together from all the campuses – staff and faculty together – it’s very moving to me,” Regensteiner said.