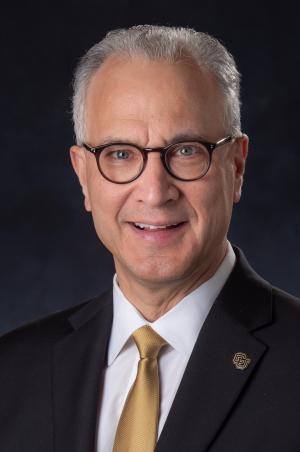 The Board of Regents on Friday voted to appoint Mark R. Kennedy the 23rd president of the University of Colorado.

The vote at the CU Anschutz Medical Campus was 5-4.

Kennedy, 62, said he is “honored and humbled” by the appointment.

“CU is one of the world’s great universities, built on a solid foundation, and it is poised to reach even greater heights. I am truly excited about the opportunity ahead,” he said. “I am committed to furthering CU’s standing as a leader in academic, medical and research excellence, and as a key contributor to the economy, health and culture of Colorado, the nation and world.”

He will replace Bruce D. Benson, who is retiring from CU in June after more than 11 years as president. Board Chair Sue Sharkey said Kennedy’s unique set of skills make him ideal for the job. He is president of the University of North Dakota and previously served as a U.S. congressman from Minnesota. Before that, he held leadership positions in some of the country’s largest corporations, including what are now Macy’s and General Foods.

“Not only has he led an institution of higher education, but he has also served in the United States Congress and has worked in complex business organizations,” Sharkey said. “I was impressed with his forward-facing vision for the university and his recognition that higher education needs to adapt if it is going to meet the needs of our citizens. The state of Colorado needs the University of Colorado to be more accessible and more affordable so that students across the state can reach their highest potential.”

Kennedy will assume the presidency in July. His complete statement and a video are at CU.edu.

A video recording of the full meeting is posted here.

The vote was preceded by statements from each board member, as well as a period of public comment that included statements from several members of the CU community and from shared governance leaders: Nancy Moore, Staff Council chair; Joanne Addison, Faculty Council chair; and Sierra Brown, Intercampus Student Forum chair.

The regents acknowledged taking into account the many comments expressed by the university community via campus forums, an online comment form, letters, emails and phone calls. They said criticism from community members indicated that CU has work to do in making all members feel included.

"CU is about culture, it's about reasearch and it's about inclusion," Gallegos said. "Things aren't going to change overnight. One person cannot move this university into the dark ages or into the future. It takes the people, the Faculty Council, the chancellors, the students, the professors ... it takes everybody to make that difference."

Said Hill, "This guy's gonna need our help, obviously. He can't do it alone."

The regents who voted against Kennedy's appointment had previously voted with the rest of the board in advancing him as the sole finalist. They said the period of comment and consideration since then led them to withdrawing their support.

Kroll said Kennedy "did not do enough to unite our community" during his campus visits. "He is not the best person to lead our university."

Said Smith, a former faculty member, "We can't have our largest contributors to the university's research dollars doubting our president's ability to be a strong leader."

Shoemaker said "the people that vote for this today will own it, for better or worse. I hope I regret my 'no' vote in the future."

The regents also voted on Kennedy's contract; it passed 8-1, with Shoemaker voting against.

Tagged with:
presidential search, Board of Regents, Mark Kennedy