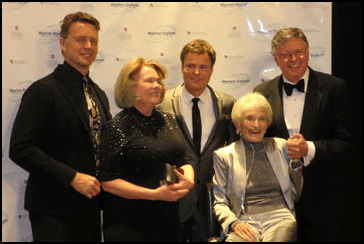 Marion Downs turned 100 over the weekend and received an amazing gift. A $1 million donation from the Anschutz Foundation means Downs and the center she funded, Marion Downs Hearing Center (MDHC), are one step closer to a new facility.

The Celebrating the Legacy Awards Gala was held the last weekend of January 2014 to raise money for the facility, located near University of Colorado Hospital on the Anschutz Medical Campus. Including the donation for the Anschutz Foundation, the event raised about $1.5 million. The new building will cost about $10 million.

Entertainer Donny Osmond performed at the gala. Dukes of Hazzard star John Schneider acted as host. The hope is the event will become an annual fundraiser for MDHC and even more of a family affair.

For Justin Osmond, Donny’s nephew and director of sponsorships and corporate relations at MDHC, helping people with deafness and hearing loss is personal for him and his family.

After having two sons with profound hearing loss, Justin’s grandmother Olive Osmond recognized families need resources and support. Downs, professor emeritus at University of Colorado School of Medicine, led the way for the hearing screening of every newborn baby in the United States.

“Their vision of helping people was fairly similar,” said Justin Osmond of his grandmother and Downs, Justin has a hearing loss detected when he was two years-old.  “We are hoping to make this an annual event and bring other members of the family here to perform.”

The new building will be a premier hearing facility housing education, research and clinical care for people with hearing loss and their families.

“There are 36 million Americans affected by hearing loss in this country,” said Sandra Gabbard, PhD, MDHC’s executive director. “Approximately 80 percent of those people aren’t getting any help. Many of them are withdrawing because they can’t hear and they are missing out on precious time with friends and family.”

It’s expected the new facility will allow MDHC to expand existing programs and create opportunities to serve the deaf and hard of hearing community.

“My grandmother saw a need so she started a foundation to help families get hearing aids for their children,” said Justin. “Marion is the pioneer in pediatric audiology. Everybody wants to know her. It’s a perfect partnership.”

Send your thoughts and suggestions for the Newsletter.
END_OF_DOCUMENT_TOKEN_TO_BE_REPLACED