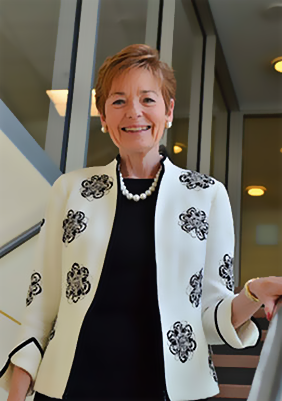 Perhaps the most relentless advocate, and prodigious fundraiser, at the University of Colorado Anschutz Medical Campus is someone who doesn't even work there.

Whenever she hears about a research project taking place at CU Anschutz, her mind goes to work: How can I raise money for this effort? How can I make sure this story gets told? How can I ensure that as many people as possible will benefit from this top-quality health care?

CU first lady Marcy Benson grew up in Oklahoma City and learned the value of hard work and giving back. "I've always thought volunteering and being active in the community is important," she says. "My parents were community oriented, so I learned from them that it's important."

That quality only intensified when she married Bruce Benson, who became CU president in 2008. Marcy notes that her husband, a 1964 CU graduate, is service-oriented in all that he does. "It's a way of life," she says. "Bruce and I think fundraising for the university is always our job." 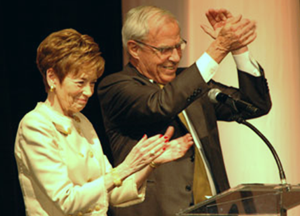 Marcy Benson and CU President Bruce Benson at a donor recognition dinner in Denver in February 2014.

At CU Anschutz, Marcy sees a constellation of health-care superstars who should constantly be in the limelight. The campus is the best-kept secret in Colorado, she feels, but that's beginning to change. "I feel that's a big part of my job—increasing awareness," she says. "No matter where I am, I want people to know that this fantastic medical campus is in our backyard, and it's one of the best health care centers in the country. You do not have to fly somewhere else for great health care."

Being patients themselves on occasion, she and Bruce have experienced superb care from the campus's physicians and staff. Eight years ago Bruce had a heart condition that was successfully treated by Larry Hergott, M.D., at University of Colorado Hospital. Dr. Hergott accurately diagnosed the condition which had eluded doctors at another hospital.

"Anytime I hear a presentation by a doctor on the Anschutz Medical Campus, I wish we had unlimited funds to give to these programs, doctors and researchers," Marcy says. "There are hundreds of stars out there."

Those who know her work say the same thing: Marcy will do everything she possibly can for you. She will brainstorm fundraising strategies. She will work the phones. She and Bruce will host dinners for potential donors. She will serve on boards and committees (she serves on many, including the Anschutz Medical Campus Advancement Committee, the Children's Hospital Colorado Foundation Board, and she chairs the Anschutz Health and Wellness Center Advisory Board).

Cheryl Kisling, former vice chancellor of development at the Anschutz Medical Campus and current principle gift officer for President Benson, says Marcy volunteers "without hesitation" on fundraising efforts. "You can send Marcy out on her own on a fundraising mission, and she gets it done. She knows who to talk to, understands the strategy, and gets it done."

Prior to the Creating Futures campaign, she and Bruce chaired the Beyond Boundaries campaign (1997 to 2003) that raised $1 billion for CU.

"Both Marcy and Bruce listen to what the donor wants, and they don't let any personal or institutional agendas get in the way," Kisling says. "They let the donor tell them what they care about. Then they say, 'Thank you,' which is very important."

For more than 15 years, Marcy has been a strong supporter of the ground-breaking research into human nutrition, obesity and weight management performed by James Hill, PhD, executive director of the Anschutz Health and Wellness Center. She served on the Center for Human Nutrition Board many years preceding the construction of the Anschutz Health and Wellness Center. "Like a lot of people," Marcy says, "I got hooked on Jim's enthusiasm for what he was doing."

The center has been spotlighted in the ABC TV series "Extreme Weight Loss" and has received national attention for pioneering wellness programs such as 5th Gear Kids.

Hill says that what sets Marcy apart is her selflessness. "She's happy being behind the scenes," he says. "She's just brilliant in figuring out how to get things done. The last thing she's looking for is credit."

She and Bruce have given monetarily to the center in many ways, he says, "but the advice and help Marcy has given us is way beyond the value of the dollars. She knows everybody, she's smart as heck and has incredibly good instincts. She's the best fundraiser I've ever worked with.

"They work incredibly well as a team," Hill says of the Bensons. "We're getting two for one in the President's Office."

'MIND AND HEART IN SAME PLACE' 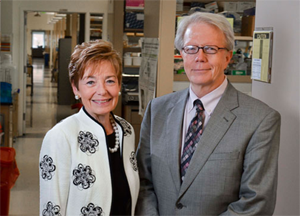 Another area of research close to Marcy Benson's heart is Alzheimer's, specifically the work of Huntington Potter, PhD, director of the Alzheimer's Disease Research and Clinical Center at the University of Colorado School of Medicine.

Marcy watched her mother suffer from Alzheimer's for 12 years. She passed away in May.

"It's an awful disease," she says. "Ever since I heard Hunt speak about his research I've been thinking this guy may be the one who discovers the cure. Bruce and I have donated to him personally every year."

Marcy serves on the Rocky Mountain Alzheimer's Disease Research and Clinical Center Community Advisory Board. The board and CU are working to secure a National Institute of Aging designation as a national Alzheimer's Research Center. There are only 27 of the centers in the country.

Potter says Marcy is a joy to work with. "Through her example, she has encouraged others to be generous as well," he says. "It's that kind of leadership that we all benefit from."

The current cost of Alzheimer's disease to the country is about $200 billion a year. By 2050, Medicare and Medicaid will spend $1 trillion a year on Alzheimer's if a cure to the disease isn't found.

"It's an incredibly draining problem for the country," Potter says. "Marcy's personal experience with the disease magnifies her intellectual realization that this research is something we should be doing. So her mind and her heart are in the same place."

Her energies are focused on a health care city that is increasingly in the national and international spotlight. University of Colorado Hospital was named the No. 1 academic medical center for quality two years in a row, 2011 and 2012. It again leads the state's health institutions honored by U.S. News & World Report in its rankings of America's best hospitals. Also, the magazine's ranking of UCH's Cancer Center jumped from 44th in the nation last year to 15th this year. These are just a small fraction of the accolades reaped by the Anschutz Medical Campus, which pulls in more than $400 million annually in research grants.

"CU Anschutz is a great place to do fundraising because there have been so many people who have benefited from the campus," Marcy says. "For patients being cared for at the campus, their college loyalties may be with another institution, but their health care loyalty is at the Anschutz Medical Campus."

Hill and other campus leaders say it's high time this quiet champion of their hard work gets some well-deserved recognition. "This woman deserves so much credit for what she’s done," Hill says. "I think a lot of people don’t realize what an asset Marcy Benson is for the university."