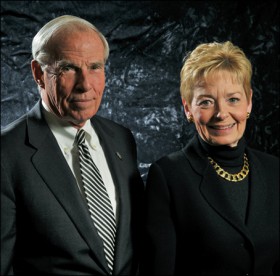 University of Colorado President Bruce Benson and his wife, Marcy, are the 2011 recipients of the Bonfils-Stanton Award for community service. Each year the private nonprofit recognizes outstanding Coloradans for contributions made to enhance quality of life for state residents.

The Wednesday, May 11, announcement of the awards calls the Bensons "skilled problem solvers, coalition builders and fundraisers who have generously given their time, talent and treasure for the betterment of the citizens of Colorado."

Sometimes referred to as "Colorado's Nobel Prizes," the Bonfils-Stanton Awards have honored prominent Coloradans for excellence in a broad range of pursuits since 1984. This year's recipients also include Dianne Perry Vanderlip, for arts and humanities, and Marion Downs, for science and medicine. All were honored at a lunch on Wednesday at Denver's Four Seasons Hotel.

Born in Chicago, Bruce Benson worked as a roughneck in the oil fields before founding the Benson Mineral Group in Denver. A tireless champion of education, he chaired the Colorado Commission on Higher Education and the boards of Metropolitan State College of Denver and the Denver Public Schools Foundation. He also chaired the boards of Boy Scouts of America and the Denver Zoological Foundation and served on numerous corporate boards.

In his political life, he was chairman of the Colorado Republican Party and Republican nominee for governor of Colorado. He received an honorary doctorate from CU and was inducted into the Colorado Business Hall of Fame in 2009. He became the 22nd president of CU in March 2008.

Marcy Benson was born in Oklahoma City and spent 19 years in Washington, D.C., where she directed the White House Fellows program in the Reagan administration and the first Bush administration.

Since coming to Colorado, she has been an ardent advocate for children's health care. As a board member for The Children's Hospital and The Children's Hospital Foundation, she co-chaired the $273 million campaign to support the hospital's move to the Anschutz Medical Campus. She has served on the boards of the University of Northern Colorado, Scientific and Cultural Facilities District (SCFD) and the Denver Public Library Friends Foundation.

"Colorado is home to some of the country's most accomplished and talented individuals, and it's our privilege to recognize the Centennial State's very best," said Dorothy Horrell, president of the Bonfils-Stanton Foundation, who added that the Bensons and their fellow award winners "provide inspiration for Coloradans and we are pleased to honor them for their accomplishments."

Downs, a pediatric audiologist whose pioneering work with infants helped create the program that today screens 95 percent of all American newborns, also has CU ties: She is a Distinguished Professor Emerita of the former CU Health Sciences Center.

The first audiologist to venture into the newborn nursery and test whether newborn babies could hear, she developed the first infant hearing screening program and spent 30 years persuading her peers to adopt the test in hospitals. She is founder of the American Auditory Society and has published nearly 100 articles and books, including a seminal textbook for audiologists-in-training. She was inducted into the Colorado Women's Hall of Fame in 2006. Still active at 97, she skied until she was 95. In 2007, she published, "Shut Up and Live: A 93-Year-Old's Guide for Living."

Vanderlip is the founding curator of modern and contemporary art at the Denver Art Museum. During her 29-year tenure, she raised the funds and support to build a world-class collection of more than 8,000 pieces including paintings, sculpture and photography. She brought to Denver the works of significant artists such as Andy Warhol and Alexander Calder, and put Denver on the map as part of the international contemporary art scene.

Her superb curatorial expertise was showcased with the October 2006 opening of the Museum's Frederic C. Hamilton Building, where she oversaw the first permanent installation of modern and contemporary work at the DAM in more than 20 years. She was instrumental in the selection of Denver as the repository for more than 2,000 works by abstract expressionist Clyfford Still. She retired in 2007 and was named Curator Emeritus, a title never before bestowed by the Denver Art Museum.

The annual awards program was established in recognition of Charles Stanton's desire to bring acclaim to their efforts, and motivate others to greater accomplishments. Honorees, each receiving $35,000, represent excellence in such fields as artistic direction, civic engagement, university leadership, historic preservation, biomedical research, chemistry and physics. Several honorees have gone on to receive the Nobel Prize, many have served as mentors to others and most have continued to make significant contributions for years following receipt of the Foundation award.

Stanton established the foundation in 1962 after the death of his wife, Mary Madeline (May) Bonfils Stanton, daughter of Denver Post co-founder Frederick Bonfils. The foundation's mission is to advance excellence in the areas of arts and culture, community service, and science and medicine. Since its founding, the foundation has awarded more than $48 million to nonprofit organizations throughout Colorado.

Send your thoughts and suggestions for the Newsletter.
END_OF_DOCUMENT_TOKEN_TO_BE_REPLACED