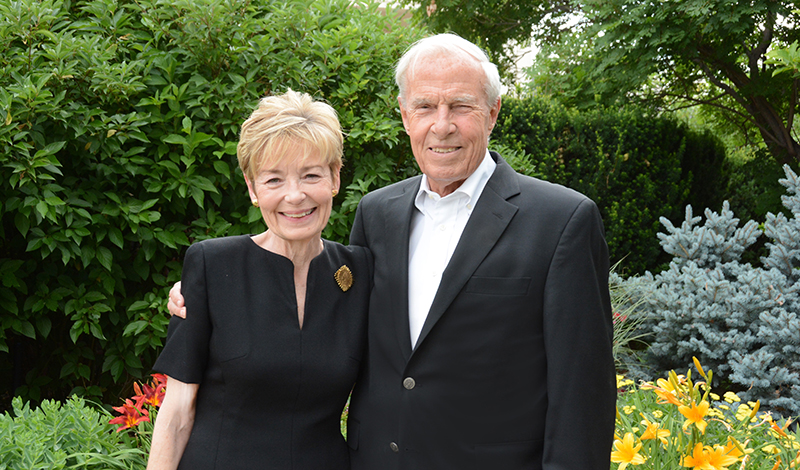 Marcy and Bruce Benson are the 2020 Citizens of the West.

Marcy and Bruce Benson on Monday received the prestigious Citizen of the West award for 2020 from the National Western Stock Show.

The honor recognizes those who best embody the spirit and determination of Western pioneers and perpetuate the West’s agricultural heritage and ideals. A committee of community leaders selects recipients.

CU’s president emeritus and former first lady worked tirelessly during Bruce Benson’s 11-plus years at the helm, advancing the university and the state.

Beyond CU, the Bensons are respected leaders in the business, education, civic, political and philanthropic communities. Together they have made a lasting impression through their tireless advocacy and fundraising efforts for issues and institutions they hold in high regard.

“I’m pleased to see that Bruce and Marcy Benson are being jointly honored as Citizens of the West,” said Philip Anschutz, 2014 recipient of the Citizen of the West award. “It is a well-deserved honor for their many contributions in the fields of education, philanthropy and business in our community and state.”

Marcy Benson also recently was saluted by the University of Colorado Board of Regents, which bestowed upon her an honorary degree. Read more here.

Last summer, Bruce Benson retired as president of CU, where he served for more than 11 years, the longest-serving leader of the institution in the past 65 years. During his tenure, CU’s research funding reached record levels, supporting the university’s strengths in biotechnology, health care, renewable and sustainable energy, and aerospace engineering. He led efforts to promote cross-campus collaboration that have resulted in cooperative academic programs and initiatives, most notably CU’s BioFrontiers Institute, led by Nobel Laureate Tom Cech.

President Benson championed free speech and open inquiry on CU’s campuses, stressing the need to teach students how to think, not what to think. He was instrumental in furthering CU Boulder’s Center for Western Civilization, Thought and Policy, as well as its signature Visiting Scholar in Conservative Thought and Policy position, now in its seventh year. To recognize his efforts, the campus renamed the program the Bruce D. Benson Center for the Study of Western Civilization upon his retirement from the university. He has noted that fostering cultural change at CU is one of his proudest accomplishments.

Before CU, Bruce Benson was a successful businessman, active in a variety of educational, civic and political activities at the state and national levels. In 1965, he founded Benson Mineral Group, an oil and gas exploration and production company. Since then, his business interests expanded to include banking, mortgage servicing, real estate development and management, geothermal power, manufacturing, trucking, restaurants and cable television.

He has served on the board of directors of several leading companies, including United States Exploration, American Land Lease Corporation, Western Capital Investment Corporation and First Interstate Bank of Denver. In 2009, he was inducted into the Colorado Business Hall of Fame.

Three Colorado governors have named him to educational initiatives and governing boards, all of which he chaired: The Colorado Commission on Higher Education (1985-89), Metropolitan State College Board of Trustees (2003-07), P-20 Education Coordinating Council (2007-08) and the Governor’s Blue Ribbon Panel for Higher Education (2001-03).

Outside Colorado, he was board chair of the Berkshire School in Massachusetts (1984-94) and also served on the board of Smith College (1988-95). Nationally, Benson served on the Board of Directors of the National Park Service and was confirmed by the U.S. Senate as a member of the National Endowment for the Humanities.

Bruce Benson has dedicated much of his time to many civic organizations, most notably chairing and initiating reforms at the Denver Public Schools Foundation, Denver Zoo and Boy Scouts. He also served as chairman of the Colorado Republican Party from 1987 to 1993, then 2002 to 2003, and he was the Republican nominee for Colorado governor in 1994.

Marcy Benson has applied her time and talents to a range of activities in Washington, D.C., and Colorado, from serving presidents of the United States to volunteering at leadership levels in health care, education, the arts and civic activities.

In Washington, D.C., she worked in a variety of capacities for Presidents Ronald Reagan and George H.W. Bush. From 1987 to 1992, she was director of the President’s Commission on White House Fellowships, a leadership program in which outstanding people from the private sector, state government and the military are chosen to spend a year working as an assistant to a senior White House staff member or a member of the cabinet. She also served as executive assistant to the Assistant to the President for Political and Governmental Affairs, was White House Liaison for Presidential Scheduling for the Reagan-Bush 1984 campaign, and worked in the White House Offices of Political Affairs and Presidential Advance. She also spent seven years in a variety of capacities at the Federal Judicial Center.

In Colorado, Marcy Benson served on the Board of Directors of Children’s Hospital Colorado for more than a decade and was co-chair of the campaign that built the new hospital on the University of Colorado Anschutz Medical Campus. She also served as chair of The Children’s Hospital Foundation for three years and has been a member of that board since 1998. She has been engaged with a number of civic and cultural organizations, including service as a board member of the University of Northern Colorado, the Denver Public Library Commission and the Scientific and Cultural Facilities District. Recently, she was one of 10 business and community leaders recognized by the Girl Scouts of America Denver Chapter as a Woman of Distinction.

As CU’s first lady, she devoted much of her time to fundraising and was actively involved with CU’s Alzheimer’s Research Center and the Anschutz Health and Wellness Center.

Maria Garcia Berry, founder of CRL Associates Inc. and a long-term National Western adviser said, “Bruce and Marcy Benson embody the values of the West by exhibiting a can-do attitude, successfully scaling mountains of challenges, and refusing to take no for an answer – all the while forging wide and diverse relationships with individuals from all walks of life for the betterment of Colorado and the West.”

The Bensons have three children and 10 grandchildren. They live in Denver and enjoy their family ranch on the Blue River.