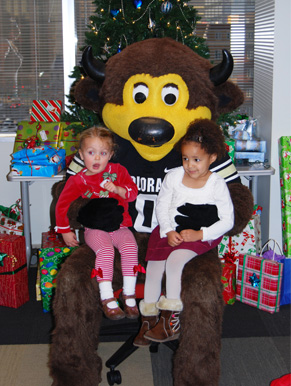 About 30 youngsters and parents with ties to Aurora’s Buckley Air Force Base took part in a celebration of the season hosted by CU System Staff Council (SSC) at 1800 Grant St. on Friday, Dec. 9. System volunteers served cookies and drinks and handed out candy canes while the kids watched a holiday movie and colored pictures.

Although the day was orchestrated by SSC, system volunteers weren’t the only ones to chip in. CU-Boulder mascot Chip the Buffalo was a big hit, playing Santa, posing for photos and helping to hand out gifts. CU President Bruce Benson greeted the military families and chatted with prospective students (circa 2017-30 or so).

“We value the contribution our servicemen and women are providing and wanted to give back, even in a small way, to some of the families where a spouse is absent this Christmas or where Christmas may be sparse,” said Judy Anderson, organizer and University Counsel special assistant. The Buckley Spouses Group at Buckley Air Force provided SSC with names of children.

SSC received 77 gifts for children ages 3 months to 13 years and several gift cards for the families at Buckley, all donated by system employees at 1800 Grant St.

David Pierce, organizer and accounting specialist in the Office of University Controller, said SSC started its outreach projects in 2008 with an adopt-a-platoon for troops in Iraq.

“We sent 26 packages with various needed items as well as some fun items and CU logo items,” he said. In 2009, SSC created an official committee focused on outreach and has sponsored a group for the Susan G. Komen Race for the Cure the past three years. They group also has hosted a “clean out your closet campaign” for the homeless.

“A lot of people view the holiday season as a good time to give and this was a great way to do it,” Pierce said. “Personally, this was the best event that SSC has hosted because we had an opportunity to see these little people’s faces light up and we did that by giving back to people that have given a lot to our country.”

View all photos from event