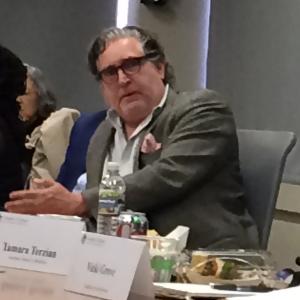 CU’s tuition waiver benefit, which is being reviewed by administrators for potential changes and expansion, proved to be a focal point of discussion among members of the Faculty Council and Regent Stephen Ludwig during his appearance at the council’s meeting earlier this month.

Ludwig visited the March 10 meeting at 1800 Grant St. for an open topic Q&A, during which he suggested the council work with the board to further faculty and staff goals for the benefit.

“My suggestion is, let the board help you with this,” Ludwig said. “I think you’ll find some support to get past the first couple of hurdles.”

System administration has been working with campus leaders in recent months to establish greater consistency with the tuition waiver benefit for faculty, staff and dependents. Transferability of the benefit among campuses is a long-stated goal of faculty and staff governance groups; last month, Faculty Council was told that there hasn’t been agreement among the campuses regarding how that might work.

Ludwig encouraged the council to bring a request to the board asking administrators to calculate the costs of a broader benefit transferable from campus to campus.

“I think you’d get a number of (board members) to say yes to at least getting us the information,” he said. “I think we need the numbers first. Then we figure out how to pay for it.

“This is an issue of political will, not money, in my estimation.”

Council member David Port said faculty who have broached the subject with financial officers are told that the unknown cost impact is a major contributor to the benefit not being expanded.

“You could also say, what would it cost us not to do it?” Ludwig said. “You could make a case based on the cost of retention and recruitment. It’s really expensive to recruit and replace faculty.”

In other discussion, Ludwig said he’s optimistic about progress being made with intercampus cooperation regarding online education at CU. He said he liked changes made by the campuses to his proposal to provide an incentive for the development of a new, fully online degree program. That initiative was announced last week by campus chancellors and provosts.

In other business at the meeting, the council voted to approve revisions to two system Administrative Policy Statements: 1008, procedures for the establishment of centers, institutes, laboratories and bureaus; and 2006, retention of university records. Those two are among the 14 policies tentatively under review for potential changes taking effect on July 1.