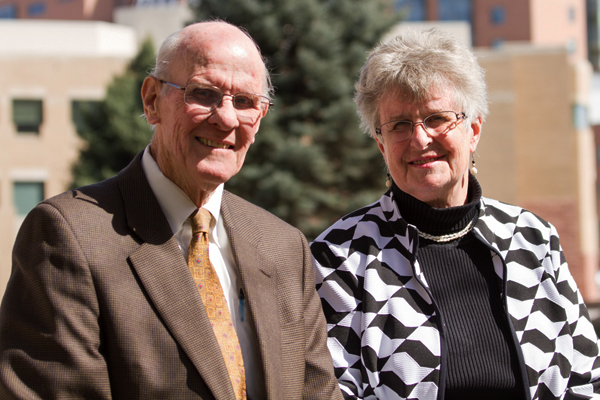 Peggy and Hans Neville were studying at Pomona College in Claremont, California, in 1954 when she sat behind him in class.

“It was a very romantic meeting,” Hans notes dryly. “That’s how we met.”

Peggy recalls falling into a muddy puddle after leaving class.

“I didn’t pick you up,” Hans counters. “You picked yourself up, and we stood back and laughed.”

“You just stood back and laughed?” Peggy asks — and then jokes: “Yes, that would be more like him.”

It was the “beginning of a great romance,” Hans says.

It was too the start of a lifelong commitment to science — and more recently, a focus on financially supporting the programs that provided them professional fulfillment and personal joy.

After Peggy earned her Ph.D. in physiology and Hans earned an M.D., they joined the University of Colorado School of Medicine faculty in 1968.

Now, more than a half century later – they’ll also celebrate their 58th wedding anniversary in December – the Nevilles are reflecting on their CU careers. Hers largely was devoted to the science of lactation, and his dedicated to studying Lou Gehrig’s disease and primary muscle disease in the Department of Neurology. He also provided patient care and taught.

“We’ve been in careers that have made a difference,” says Peggy, who was the Basic Science Division Chief in CU’s Department of Obstetrics and Gynecology. “It was important to do good work, and looking back on it, I think we did.”

Indeed they have, so much so that the Nevilles are financially bolstering research of women’s reproductive health, with a particular focus now on an ovarian cancer project Peggy was instrumental in launching.

They’ve committed more than $560,000 to the CU Anschutz Medical Campus; part of that amount will fund the Florence Crozier Cobb Professorship to foster research in women’s reproductive health. The Nevilles also are supporting the work of young investigators who study reproductive science.

The couple retired in 2013 and are professors emeriti. While their professional involvement at CU is largely behind them, they still effect positive developments in medicine.

Hans is quick to note his wife is the driving force behind the gifts: “Ninety-five percent of the thinking was by her. I would certainly give her the lion’s share of credit for deciding to present this in the form of a joint gift.”

But Peggy acknowledges she wouldn’t have the financial wherewithal to give if it weren’t for her husband’s support through the decades.

“There was always the feeling that my husband was supposed to be the supporter of the family and money that I brought in was extra. So I took my salary — particularly from when we worked after age 65 — and put it into an endowed professorship, which I named after the woman who said, ‘You can be anything you want to, Peggy.’ ”

That woman was Peggy’s mother, Florence Cobb. The eldest of five children, Peggy helped care for her siblings long enough to realize that “doing the laundry and changing the diapers was not the life I intended to lead.”

So at 15, she told her mother she wanted to be a doctor.

Her mother replied: “You can do anything you want.”

“I loved her for that,” Peggy says.

She did attend medical school for a couple of years but left to focus on research.

“I am really a pure scientist,” she says. And while she studied lactation science, she discovered later that the problems of preterm birth, ovarian cancer and other serious ailments affected women much more negatively than not being able to breastfeed a child, hence her emphasis on reproductive health.

“This was a place where any funds I had should go,” Peggy says.

Sustaining a research career today is difficult, she says, because the competition for work and funding is intense — considerably more so than when the Nevilles began. Today’s bright minds need financial support, Peggy insists.

The Nevilles see the big picture. They understand gifts like theirs can collectively inspire and aid scientists as they embark on new research. But when Peggy and Hans view their gift, they don’t say they see it as a grand philosophical gesture.

It’s not that sort of big picture. The immense payoffs, instead, are in the curiosity of lab work. They’re in research. They’re in science.

Someone complimented Peggy recently: “You’ve been such a wonderful example for women in science.”

Her response was a true scientist’s: “I wasn’t intending that. It wasn’t because it was a women’s issue. It was because it was a very interesting biological issue. My agenda was just to be in the lab and do some work. It seemed to have worked out.”