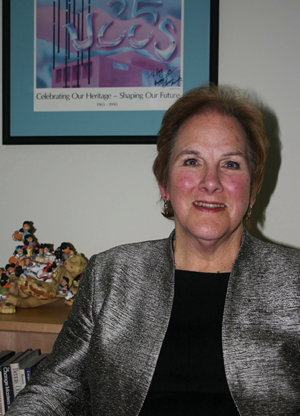 As a young person who loved to read, Margaret “Peg” Bacon thought being an English teacher would lead to great discussions about great books. But as an educator in inner city schools in Michigan, she discovered that the children in her classrooms could barely read. She wanted to learn more about literacy problems and returned to college where she earned a master’s and then a doctorate in education at the University of Massachusetts.

Upon graduation in 1978, Bacon was hired as an assistant professor at the University of Colorado Colorado Springs. After a 34-career with the university as a professor and dean, and now as provost and executive vice chancellor for academic affairs, Bacon plans to retire in July.

Bacon likes to say she has grown with the university. When she first arrived, her “landscaped office” was on the lower floor of the old library building, and neighbors could hear even the most private conversations. Later, in what was supposed to be a temporary move, the College of Education was relocated across the street from campus in rental space where it remained for 15 years. In 1997, the college moved to Columbine Hall where Bacon had a real office with a door and views of Pikes Peak, a reward, she says, for being banished all that time. As a professor, teaching in what is now Main Hall, she remembers hot summers without air conditioning. There was no choice but to open the windows even though a hornet’s nest was nearby and its residents regularly circled the room as students watched, only half hearing her lecture.

Colorful stories aside, Bacon has been a standard-bearer for academics and innovation at the university and has helped make it the thriving community it is today. Both are moving forward: the university with new programs and collaborations, and Bacon with equally exciting chances to spend more time doing what she loves.

1. What are some of the biggest changes you’ve witnessed during your 34-year career at the university?

My first summer here, my parents dropped me off and took my car to run errands, but got lost and couldn’t find their way back. Nobody in this community knew where the university was. People sent my parents down to Colorado College; others said, “You know there’s a University of Colorado in Boulder,” and, “You know I think there’s a campus in Denver.” Nobody knew that this campus existed. Now I feel that we are a pivotal part of this community; this community feels like we are the future.

Now we have a huge effort going to develop online courses and all of our classrooms are what we refer to as smart classrooms. When we built Columbine Hall in 1997, all the classrooms had projectors so people started to use PowerPoint instead of overhead transparencies and the boards. The amount of technology we use in our teaching has increased dramatically, so teaching doesn’t have to be face- to-face.

But community has always been a hallmark of this campus. We only have one classroom on campus that seats more than 300. Even when we build new buildings, we don’t build with very large classrooms because we like to keep that close faculty/student contact. Early on, before we had registration by phone and now by Internet, students would come and line up for classes. In some ways, that was nice. You could see other faculty, we’d hand out these cards, there’d be huge lines – the weather was always bad. One of the tensions we have is keeping that sense of community as we grow.

One area we’ve really grown in is the research we’ve done here. We’ve added that to our mission. We’re not what is called a research-intensive institution; we value research and teaching equally. On our campus, some of our best teachers are also our best researchers. Their research enhances their teaching.

2. What would you consider your biggest accomplishment while at the university? Is there anything you feel you’ve left “undone?”

Being a professor and administrator in higher education is about learning and trying to help people learn. I think there’s a JFK quote that says you can’t be a leader without being a learner, too, and an institution of higher ed is a great place to learn. One of the things that happened to me as provost is that I got to know about a much broader array of what is happening in other disciplines.

My field is education in literacy and teacher education. I’d like to think my biggest accomplishment was being able to help teachers become inspired or learn how to do their craft and have a wider impact. I try to get them to mesh theory and practice in the classroom and have that impact.

As a provost, what I’ve tried to do is get people together to work on issues. For example, in my first year as provost, we were working on an academic strategic plan, and the faculty kept saying they’d like to do this or that or the other thing, but they couldn’t because that’s not what they got rewarded for. What occurred to me is that the tenure and promotion system is totally under faculty control, so we could actually fix it. Some of this came about when the university was looking at tenure; they had come under fire partly because of the Ward Churchill incident in Boulder. I set up a task force with faculty leadership and they looked at how to revise criteria to give faculty credit for doing research across disciplines, for instance, or advising students or working with undergraduates.

We’re also in the middle of looking at our general education curriculum -- the required liberal arts courses that everyone needs to take.  There’s been a lot of political effort around this. Harvard spent about 10 years revising this and many other institutions are looking at this, too. Many kids don’t see connections between those courses and their lives; they see them as something they have to get through until they get to stuff they really want, which is their major. We ought to be able to make it more coherent and more meaningful for students. So I set up a faculty task force and they came up with a new set of goals. The faculty approved the recommendations by 93 percent, which is very heartening. Now we’re in the middle of looking at what kind of curriculum to develop. It’s a faculty-driven process, but I feel I’ve provided some leadership for that. I hope it ends well. I hope people are sufficiently committed because it makes more sense for the kids. I would like us to have a signature curriculum. I would like us to be able to say to parents: “Here’s what your students will experience in their first years here. They will have a curriculum that’s connected; they will have a curriculum where they’ll see the meaning; they will have some connections with real life; they will see things that are cross-disciplinary because that’s the future.”

3. What played into your decision to retire?

I turn 66 this year. I had polio as a child – just in my leg – and there are some symptoms that come back, and I’m experiencing some of those. It has to do with the energy level. I want to travel. I want to not have worked my whole life because this is pretty demanding. I standardly have 12-hour days and, when there are evening events, I work 15 or 16 hours and sometimes on the weekends. It’s all-consuming. I enjoy it all, but I want to see what happens in the next phase of my life.

4. What are your plans for this next phase?

Definitely more travel. I love to travel. I just got back from Vietnam and Cambodia. I’ve taken brief vacations. I’ve been to the Galapagos, Machu Picchu. My partner and I are headed to Ireland and Switzerland. There’s the Mediterranean, Turkey; I haven’t been to China.

And I have a journal that I’m keeping. One of my colleagues gave it to me last year when I turned 65. I’ve been jotting ideas about things I want to do. Of course, I love to read, so there are all the books I want to get to. I would really like to work on my Spanish and become more fluent. And I certainly want to work on my health and exercise. I’d like to get a little better at golf; I’m not particularly athletic but it’s fun to be out. I’ll just see what occurs.

Certainly, I’ll want to contribute something back to the world that’s given me much. I don’t know where that will be. I’ve already been asked to be on two boards, but someone suggested that I should say “no” the first year so I can figure out where I want to invest my time, energy and talents.

5. Are there any aspects of education that trouble you?

The biggest thing that troubles me -- particularly in Colorado, but also nationally -- has to do with how we’re funding it. It feels to me like education is becoming a private rather than a public good, and I find that disturbing because I think education is the key to the future. It’s what I’ve invested in; it’s how people find their potential. As state support goes down and tuition goes up, good education is accessible to fewer and fewer people. Our chancellor and campus have been adamant about trying to keep our financial aid and scholarships such that we can continue to serve. Forty percent of our students are first-generation students and 30 percent of our students are Pell grant-eligible.

As an educator, you believe in the human potential. Kids in the best high schools today are better than any in my generation in the education they receive, the curriculum, their writing. But everybody doesn’t have equal access to the best. In K-12, there’s a real gap. In District 20 here, they cut art, so parents raised money to hire an art teacher. But there are parents in some communities who can’t do that so kids don’t get art. Those kinds of things are disturbing.

Tagged with:
College of Education

Fenell reflects on 37 years (and two deployments) at UCCS