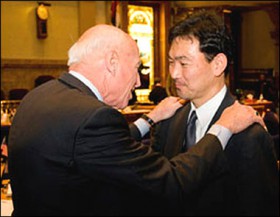 Heath was diagnosed with Stage I esophageal cancer in July 2009. He came to UCCC and University of Colorado Hospital, where he met Norio Fukami, M.D., a therapeutic endoscopist and assistant professor of gastroenterology at CU School of Medicine.

The current standard of treatment for early esophageal cancer involves an "open" operation during which the surgeon removes a big part of the esophagus, then stretches the stomach to attach to the remaining esophagus. Recovery from the procedure can take months.

But Fukami, who trained in Japan and at MD Anderson Cancer Center in Houston, chose to do an advanced, minimally invasive endotherapy using an endoscope and a special knife to cut out just the tumor and surrounding tissue, leaving the esophagus in place. Fukami is conducting research to show the procedure, which is new to the U.S., can be safe and effective.

Heath credits Fukami and the advanced technique not only with saving his life, but also with saving him from lost work time and pain. He was back to work the day after his procedure.

Primavera offered emotional testimony about William Robinson, M.D., professor of medical oncology at the CU School of Medicine. She credits him with enabling her to outlive one doctor's suggestion that she would need to find someone to raise her then preschool-aged children.

"Twenty-one years later, I'm still here against all odds. I've taught my girls to drive and taken their prom pictures, and one day I will walk them down the aisle. Dr. Robinson, I owe you my life."

"I expressed to (Raben) my fear mainly that I would never be able to sing again, and he was the first person who gave me a reason to feel positive," Merrifield said. "Today I am cancer free. My gratitude is not just as a representative who understands the value of this center for Colorado, but as a human being who understands on a heart-to-heart basis what these individuals have done for me."

Other legislators stepped up to offer their testimony about and support of UCCC, the School of Medicine and UCH. Several offered personal stories about their loved ones' care at the center.

Sen. Mike Kopp, R-Littleton, spoke about his wife's cancer treatment at UCCC. "Everybody said drive down the street and get to this campus," he said, referring to the University of Colorado Hospital on the Anschutz Medical Campus. "We heeded the advice of the pathologist and the oncologist. My wife is cancer free. These doctors are healing people."

Kopp has joined the University of Colorado Hospital's Cancer Expansion Committee to raise money for an addition to the Anschutz Cancer Pavilion, which, 10 years after opening, has outgrown its space.

Sen. Suzanne Williams, D-Aurora, who worked to move the CU medical enterprise to the Anschutz Medical Campus in the late 1990s, said, "The Anschutz Medical Campus is a huge economic boon to the city of Aurora and to the region, bringing approximately $2 billion to the region. What this campus will mean to the state of Colorado is the ultimate crown: It will become known as the cancer center, the medical center of the West."

Sen. Nancy Spence, R-Centennial, also noted that she and her husband, Pete, participate in the Prostate, Lung, Ovarian and Colorectal Cancer Screening Trial at UCCC, a long-term study funded by the National Cancer Institute.

Andrew Thorburn, Ph.D., UCCC interim director, was among a dozen center and university representatives on hand for the joint resolution's introduction and passage.

"We're the cancer center for the state of Colorado," he said. "It's really nice that we are getting this recognition and appreciation from our elected officials."