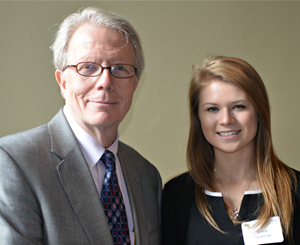 Desperate to find care options for her grandmother, Anna emailed Huntington Potter, Ph.D., professor of neurology at the CU School of Medicine. The nationally renowned Alzheimer’s disease and Down syndrome researcher did more than just reply.

Giving it all back

Potter helped Anna find a summer position in a research lab at CU Denver and, a year later, a research assistantship in his own lab at the CU Anschutz Medical Campus. The Kent Denver School student spent the summer before her high school senior year studying Alzheimer’s — the disease that affects 5 million patients in the U.S., the disease that has changed her grandmother forever.

Anna was paid a stipend for her summer of work. She gave it all back to Potter’s lab for more Alzheimer’s research.

“I felt so lucky for getting the opportunity,” Anna says. “I knew the best thing I could do was give the money back to the lab for research.”

Potter, who directs Alzheimer’s disease research at CU Anschutz, has distinguished himself in the scientific world for his role in discovering a mechanistic link between Alzheimer’s disease and Down syndrome— and his commitment to developing new treatments for both.

With nearly 30 years of experience in the field, Potter has big plans for Alzheimer’s research and care at CU Anschutz, including creating a comprehensive, nationally recognized Alzheimer’s Disease Research and Clinical Care Center to serve Colorado and surrounding states. He also is planning a comprehensive human clinical trial for a treatment called Leukine, which had good results in mice trials and initial human trials. The price tag for the upcoming trial: $4 million.

Many medical researchers survive on funding from the National Institutes of Health (NIH), which has experienced a 20 percent budget decrease in the last decade, according to a September 2014 story on National Public Radio.

“I’ve been shocked to find that some of the most talented researchers in the field are distracted from their work with fundraising demands,” Anna told the audience at a recent CU Advocates luncheon highlighting Potter’s work. “I’m really hopeful that the small things I’m doing will help. I know Dr. Potter appreciates every little bit of help.”

Hoping for a breakthrough

The things Anna does for Alzheimer’s research and awareness are hardly small.

She served as an intern for the Walk to End Alzheimer’s. As a high-school independent study project, she developed the Memory Box Project, which educates middle-school students about the disease. The project also incorporated a fundraising component that raised more than $3,000 for Alzheimer’s research at CU Anschutz. Anna shared her work at the 2014 Alzheimer’s Association International Conference in Copenhagen.

All this from someone who only recently got her driver’s license.

“I didn’t know how I could help until I met Dr. Potter,” Anna says. “My parents and I are hoping for a breakthrough … for my grandmother.”

Send your thoughts and suggestions for the Newsletter.
END_OF_DOCUMENT_TOKEN_TO_BE_REPLACED