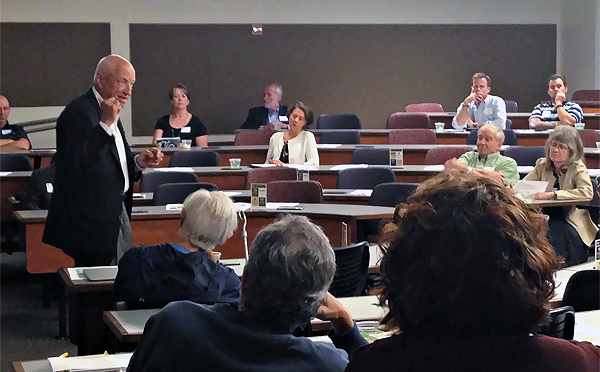 While the 2015 legislative session brought a welcome boost in funding for the University of Colorado and higher education across the state, the long-term outlook for sustained improvement remains bleak.What will it take for that to change? Sen. Rollie Heath, D-Boulder, says a ballot initiative in the works for the 2016 election would take aim at loosening the grip of TABOR spending limitations, which leave higher education especially vulnerable to budget cuts. 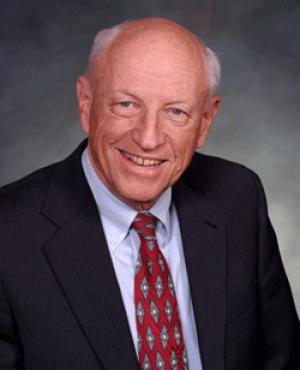 “What is being discussed at some length … would not take on TABOR directly, but basically would permanently de-Bruce it,” Heath told members of the CU Advocates and CU-Boulder alumni during a June 10 presentation at CU-Boulder.

Heath said voters would be asked to allow the Legislature to retain revenue that exceeds limits stipulated in the Taxpayers Bill of Rights, spearheaded in 1992 by Douglas Bruce. Similar de-Brucing efforts have had mixed success in past elections.

“How we unwind this is going to be up to all of us,” Heath said. “We’re going to try again, and I’m going to need your help.”

Heath called Colorado’s “one of the most complicated situations in the whole country” given the constitutional spending limits and the requirement of a vote by the people to approve any tax.

“Inflation is at a historic low in the country and we’re having growth in Colorado. We are experiencing infinitely higher growth in the economy which is not factored into (TABOR limits) at all,” Heath said. “It’s putting demands on education, infrastructure, mental health – virtually everything you have – and you’re limited to growth plus inflation (for government spending). You know what you’re going to have … you know where the squeeze comes.”

The TABOR limits have triggered required refunds to taxpayers. Heath and others argue the revenue would better serve the state if lawmakers could steer it toward higher education, transportation and other areas feeling the strain resulting from growth in times of diminished funding.

The June 10 CU Scoop event, jointly presented by the CU Advocates program in the Office of the President and the CU-Boulder Alumni Association’s Boulder chapter, drew about 50 to the Wolf Law Building. Todd Saliman, CU vice president for budget and finance, and Kelly Fox, senior vice chancellor and CFO at CU-Boulder, detailed the CU budget and projected possible scenarios for future funding. In charts depicting the expected trend through the 2024 fiscal year, state revenue is shown not keeping pace with mandatory spending.

“We’re predicting decline (in higher education funding) over time,” Saliman said. “Folks often think that’s because K-12 is going to be taking an ever-increasing portion of the budget. But the portion really growing is health care. … We’re all getting older, and as we age, we all become more expensive to serve on Medicaid.”

What might CU’s share of state funding for higher education be in the not-too-distant future? Saliman forecasts CU receiving $248.5 million from the state in FY 2023-24. That’s an increase over the FY 2016 total of $184.6 million.

“But over the course of nine years, that’s close to flat funding,” Saliman said, “which puts a lot more pressure on tuition.”

Fox outlined CU-Boulder priorities set by Chancellor Phil DiStefano, including revenue diversification and cost containment, which will better equip the campus for diminished state funding. Examples of revenue diversification: the newly implemented structure of the Office of Advancement working to grow the endowment, efforts to grow industry-sponsored research funding from the current $20 million annually to $100 million, increased recruitment of international students. Cost containment measures include continued movement away from records on paper toward digital records.