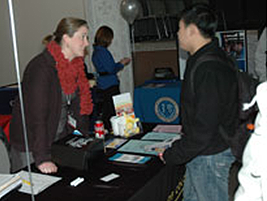 Hanna Kozlowski and Freddi Gidan are both underclassmen at the University of Colorado Denver, but they're already planning for what they need to do to get into medical school.

At Monday’s Health Professions Information Fair they stopped at a table that offered information about master's and doctoral programs at the University of Colorado Anschutz Medical Campus. About 450 students attended the fair, which is in its second year, in the Tivoli Turnhalle.

Both currently premed students, Kozlowski plans to become a gynecologist and Gidan hopes to become a pediatrician. "I'm a freshman, so I want to know what I need to do to kind of prepare myself for applying for medical school," Kozlowski said.

Gidan, a sophomore, said she is leaning toward applying to the CU School of Medicine.

"I've always been interested in helping little kids out because my family has gone through a lot of health issues," Gidan said. "I'm really close with my pediatric doctor, so that's pushed me into it also."

Denise Leberer, a health professions adviser at the university, said about 50 programs and schools had booths at this year's fair, including the American University of the Caribbean. Students from universities and high schools across the state got a chance at a "one spot" sampling of programs.

"We have different schools here - from pharmacy to nursing to medical, all the different professions - so students can talk to admissions representatives from the different programs to find out what they need to do to be a competitive applicant and what their prerequisites are," Leberer said.

Demand for health care professionals is on the rise and medical schools nationwide are increasing enrollments to keep up, she said. "There's going to be a shortage of physicians," Leberer said. "There was a shortage of nursing, big time, several years ago, but there's still that projection that they're going to be needed. ... When they talk about potential jobs, it's in health care."

Send your thoughts and suggestions for the Newsletter.
END_OF_DOCUMENT_TOKEN_TO_BE_REPLACED