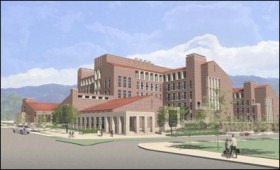 Work has officially begun on a new state-of-the-art research and teaching facility that will greatly enhance science and engineering education and discovery at the University of Colorado.

The Wednesday, Sept. 9, groundbreaking of the Jennie Smoly Caruthers Biotechnology Building also signaled a boost of the state's position in the U.S. biotechnology economy. The first phase of the 257,000-square-foot building is slated for completion in fall 2011, with plans for a 54,000-square-foot addition at a later date.

The building will house 60 senior faculty researchers and 500-plus research and support staff. Their combined work will develop more effective medical diagnoses and therapies for cardiovascular disease, cancer and infectious diseases, and create new opportunities in regenerative medicine.

Benson said the building "will draw on the talents of scientists and engineers from several disciplines and create an incubator where innovation and discovery thrive."

Also attending was Gov. Bill Ritter, who said research at the facility "will have a profound impact on Colorado's biotech economy. This facility will continue to strengthen Colorado's business environment and elevate our bioscience ecosystem nationally and globally as we lead Colorado forward."

Over half of the building's phase I cost already has been committed, including more than $60 million from the university, $20 million in gifts from an anonymous faculty member, $2 million from Jack and Jeannie Thompson, chair of the University of Colorado Foundation board of directors, and other private gifts.

Additional public and private support is being sought for building construction, which will cost between $120 million and $145 million for the first phase.

"The foundation's role is to raise private support for the building," said Jeremy Simon, CU Foundation spokesman. "Now that construction has begun and we're accelerating our outreach about its likely impact on CU and the region, we hope donors will be increasingly inspired to support this building, and help CU solve science and engineering quandaries, pursue advances in health, and save lives."

More information on the Caruthers Biotechnology Building and the Colorado Initiative in Molecular Biotechnology is available at http://cimb.colorado.edu/.