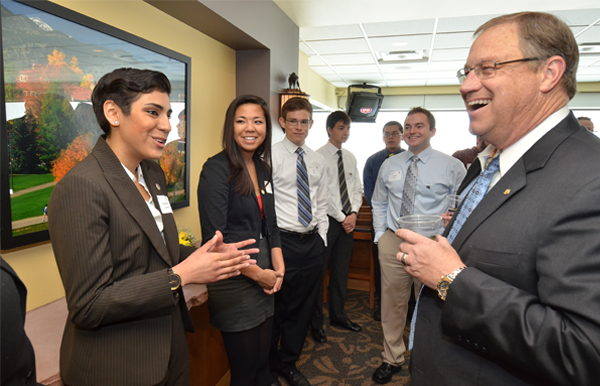 Just like some of the students he sat with, Greg Garland was the first in his family to go to college. Now he is the Chief Executive Officer of Phillips 66, one of the nation’s largest energy companies.

Eight University of Colorado Boulder students attended an informal chat with Garland on Tuesday at Folsom Field. Garland spoke about his 30 years of experience in the oil industry and answered students’ questions afterward. Garland was at CU-Boulder to meet students and give a check to CU as part of the last installment of the $3.5 million Jennie Smoly Caruthers Biotechnology Building commitment.

Alyssa Faustino, Geneva Sanchez, Cort Wernz, David Thayer and Lorenzo Herrera are earning degrees in the Leeds School of Business, while Brandon Lin, Kelsey Niemeyer and Aaron Katz are earning degrees in the College of Engineering and Applied Science. Students spoke candidly about what attracted them to apply for internships and jobs at Phillips 66.

“There is lots of energy at CU where students want to make things better,” said Alyssa Faustino, a business student who will join Phillips 66 as a new employee in Information Technology, to Garland Tuesday. “That kind of curiosity led me to Phillips 66. With other recruiters I felt like I was going through an assembly line. At Phillips 66 you do care about honor, commitment and safety.”

The event started with informal networking, where Garland—who was visiting the CU campus for the first time—talked with students in small groups. He spoke about a turning point in his career when he moved to Qatar in 1997 to manage one of the first oil operations in the Middle East for ConocoPhillips (which split from Phillips 66 last summer). Although he didn’t want to take the job initially, he learned to view the company with a broad perspective. After Leeds student Geneva Sanchez asked Garland what kept his interest in the oil industry, he offered some career advice.

“Be willing to step outside your comfort zone,” Garland said. “Your education doesn’t stop when you leave the university, it continues forever. You’ll become more valuable to your company.”

Students also asked about future revenue streams for Phillips 66 as well as how to gain the most from a job at the company. Afterward, students remarked on the experience.

“That was an amazing opportunity,” Sanchez said.

How Lahijanian creates safety and soundness in autonomous systems