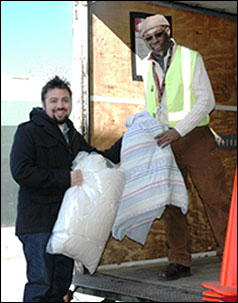 On Nov. 10, Danny Felipe-Morales sent an e-mail to friends and co-workers that stated simply, "I am putting together the third annual Blanket Drive for the Homeless and would like to invite you to participate this year in attempting to break last year's mark of 142 blankets."

Little did he know how phenomenal the response would be. During the latest drop-off drive to theDenver Rescue Mission and Samaritan House, Felipe-Morales, with his signature smile, cheerfully said he had already surpassed his donated blankets goal, he just hadn't crunched the numbers.

"I sooo underestimated the total number of blankets," said Felipe-Morales, IT systems and support professional in the Office of the Registrar. "We have donated 337 blankets. That's an increase of 237 percent."

Felipe-Morales delivers socks and blankets to shelters for women and children throughout Denver. With the drive continuing through January, he is hopeful enough socks will be donated to break last year's record of 150.

Although the blanket drive is in its third year, it is the second year Felipe-Morales has included the drive as part of the Giving Back Campaign, a University of Colorado initiative encouraging faculty, staff and students to take time to help their community. In its second year, the campaign launched Nov. 29 and continues through Feb. 28.

One major catalyst in the growth in donations is a brief published in the November edition of5280 magazine under the new "Get Involved" section focusing on needs for the homeless. The magazine highlighted three charitable activities, including the blanket drive.

"I got tons of responses," Felipe-Morales said. "My phone was blowing up! Donations from Walsenburg, Vail ... all over Colorado." A Girl Scout troop – whose leader works at Anschutz Medical Campus – conducted its own drive and donated blankets to the cause. Felipe-Morales has been spending time on the weekends driving to outlying areas to gather the blankets and socks.

On Friday, Dec. 3, a cheerful donation assistant was curbside to help unload what he anticipated as a bag or two of donations. His mood lightened further as bag upon bag upon bag, blanket upon blanket, were passed from Felipe-Morales' SUV into a waiting truck. It was noon, and homeless men were beginning to congregate around the Denver Rescue Mission doorway, one jokingly barking orders at Felipe-Morales for optimal photo ops: "Now turn this way and smile!" "Now hand him the bag!" Felipe-Morales explained those blankets were being taken to the mission on the north side of town, "This mission gets a lot of donations. The other one doesn't get as many."

Next up: Samaritan House, where dozens more blankets were dropped off. Felipe-Morales would laterÂ  head to the women and children's shelters.

All this after Felipe-Morales in December 2008 passed a freezing elderly man sitting on a bench by the creek off Larimer Street and Speer Boulevard. "He couldn't even speak," recalled Felipe-Morales. "I bought him a coffee and sandwich from Starbucks and convinced him to let me take him to the Denver Rescue Mission."

When Felipe-Morales and the homeless man got to the mission they found it packed with people; volunteers were scrambling because they had a shortage of warm blankets in the face of sub-zero temperatures. Felipe-Morales saw this desperate scene as an opportunity to give back to his community and give back to those less fortunate. His initial blanket drive in 2008 garnered an impressive 113 blankets to warm and comfort homeless men and women. And now, with more than 337 blankets donated so far, the good will of Felipe-Morales, the University of Colorado community and the Colorado community as a whole is truly blanketing the Denver area.

To donate now through the end of January, contact Felipe-Morales atDaniel.FelipeMorales@UCDenver.edu.