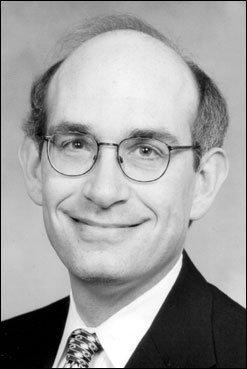 Brian E. Lebowitz has a deep fondness for used books and bookstores, a keen interest in Judaica and the acumen to amass a collection of 19,000 works of 20th century Jewish-American Literature. He is donating this collection to the University of Colorado at Boulder, and faculty members say the gift will enhance the university's stature.

Further, they say it will bring "effervescence" to the libraries, English, Jewish studies, art and art history, and the humanities. The donation will be celebrated in a Thursday, Nov. 11, event that will include readings by three authors whose works are part of the collection.

Lebowitz, a tax attorney, said he assembled the collection partly because he found "satisfaction in building something of potential value that would survive me."

The collection of books – all in English and all first-edition volumes, some very rare – spans more than 100 years of Jewish-American literature, includes the work of more than 1,500 authors, and comprises Jewish-American authors published in the last century. It is valued somewhere between $750,000 and $1 million.

"This rich, comprehensive collection of 20th-century Jewish-American fiction will support the teaching, research and discovery agendas of, for example, the English, history, religious studies and sociology departments, ranging from the ancient past to the contemporary moment," said James Williams II, dean of CU Libraries.

"More specifically, it will support, as never before possible, the comparative and theoretical work of the faculty that focuses on American Jewish diversity and identity through the lens of literature," he continued.

Thea Lindquist, professor of library studies and associate director of CU-Boulder Libraries, noted the collection will enrich the libraries' current holdings, particularly with the addition of lesser-known and alternative works by well-known Jewish-American authors.

Once the collection is catalogued, she said, the contribution it will make to the support of scholarly inquiry into all aspects of Jewish-American studies on the CU-Boulder campus "cannot be overestimated."

Also, Shneer suggested, the collection complements the program's existing work. "Many of our faculty members have designed curricula around literature and culture, making the collection central to the work this university does."

Katherine Eggert, associate professor and former chair of English, said the collection is an outstanding body of work that includes several authors with ties to CU. In a note to Lebowitz, Eggert added: "I am quite simply in awe of the care and intelligence that you have obviously put into building this extraordinary collection."

"We are really building something new: an innovative Jewish Studies program in an area of the country where Jewish-American history and identity are becoming more, rather than less, important," Eggert wrote. "I'm delighted that the English department is part of it."

Shneer added the collection will be a central resource and a recruiting enticement for students and faculty in CU's growing Jewish studies program.

The university will formally launch and celebrate the Brian E. Lebowitz Collection of 20th Century Jewish-American Literature in an event on campus featuring readings by three authors whose works are in the collection. The event also will include a small exhibition of selected books – some very rare and valuable – from the collection.

The authors appearing at the event are: Steve Katz, critically acclaimed author and CU professor emeritus of English in the creative writing program; Sidney Goldfarb, renowned poet, playwright, professor of English and co-founder of the Creative Writing Program; and Robert Alter, one of the world's foremost translators of the Hebrew Bible and scholar of modern Jewish literature.

The event, which is free and open to the public (but for which RSVPs are requested because of limited space) is scheduled for 7 p.m. Thursday, Nov. 11, in the CU-Boulder Art Museum's Visual Arts Auditorium, Room 1B20 in the new Visual Arts Complex. Parking is available adjacent to the Visual Arts Complex in the Euclid AutoPark, east of the University Memorial Center at Broadway and 16th Street.

For more information or to reserve seats, see http://www.jewishmovers.org/classes/57,www.colorado.edu/jewishstudies or call 303-492-7143.

Send your thoughts and suggestions for the Newsletter.
END_OF_DOCUMENT_TOKEN_TO_BE_REPLACED