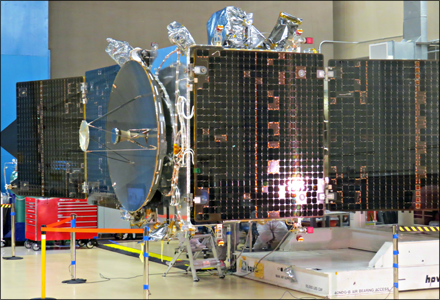 MAVEN awaits its trip to Florida -- and later this year, Mars -- at Lockheed Martin in Jefferson County. (Photos: Jay Dedrick/University of Colorado)

“It just gave me goosebumps to see it sitting here, ready to go to Mars,” he said.

“It” is MAVEN, the Mars Atmosphere and Volatile Evolution MissioN, a spacecraft whose science is being driven by the University of Colorado Boulder, specifically its Laboratory for Atmospheric and Space Physics (LASP). About the size of a school bus, MAVEN sat behind glass in a large holding area at Jefferson County’s Lockheed Martin Space Systems, where representatives from that company, CU and NASA gathered last week to meet with media in anticipation of the craft’s pending delivery to Florida.

Jakosky – a professor of geological sciences, LASP faculty research associate and director of the Center for Astrobiology – is MAVEN’s principal investigator. And while he’s aware the dollar figure attached to MAVEN brings it plenty of attention – the $670 million total flowing to the mission’s partners represents the single largest research contract in CU-Boulder history – he is quick to cite numbers that speak to the human connection at the university.

“We have four professors working on this. These are teaching faculty who will take this (experience) back into the classroom,” Jakosky said. CU-Boulder also counts 15 Ph.D. scientists at LASP working on MAVEN with  support from 120 students at LASP and 120 professional engineers and operations staff members.

“So CU has significant involvement in this mission,” Jakosky said.

After the July 15 media event, MAVEN underwent a final review by industry experts to ensure the craft is ready for its journey to Cape Canaveral on Aug. 2. It will be trucked to Buckley Air Force Base then loaded onto a C-17 military transport aircraft, which will fly it to Florida.

An Atlas V rocket, built by Centennial’s United Launch Alliance, will carry MAVEN into space sometime from mid-November to early December. The trip to Mars will take about 10 months.

Once MAVEN is orbiting the red planet, the mission’s science activity will take place at LASP.

“Mars was once a very happening place,” said John Grunsfeld, associate administrator with the NASA Science Mission Directorate. “One of those mysteries of the universe is how Mars lost its atmosphere.”

As the first mission designed to understand the upper atmosphere of Mars, MAVEN will help work on that riddle. Scientists want to know what role the loss of atmospheric gas to space played in changing the planet’s climate.

The craft carries a telecom unit and eight science payloads, most provided by the University of California at Berkeley Space Sciences Laboratory. Oversized holding areas at Lockheed Martin housed MAVEN  while it was put through the rigors of simulated space travel. In one space, sound waves louder than a jet engine blasted the craft to replicate launch. A vibration table vigorously shook MAVEN in another room. In yet another area, compared to a giant thermos, liquid nitrogen was pumped in to create the cold conditions of space, followed by heat lamps simulating sunshine.

“This is what you dream about as a kid – exploring another planet,” said Guy Beutelschies, MAVEN spacecraft program manager at Lockheed Martin and a CU alumnus.

The data that MAVEN aims to collect is a boon to science. Its high-profile mission also bodes well for future research at CU.

“The success of a project like this attracts more projects,” Jakosky said.