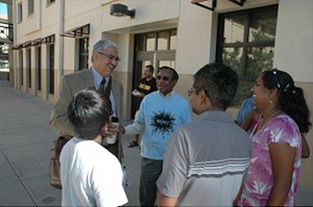 The SUVs, vans and pickups of UCCS freshmen and their families were lined up the morning of Aug. 16 as the newest members of the campus community moved into university housing.

Greeted by the Office of Residence Life student resident assistant staff, legions of current students, staff from multiple campus offices, and the occasional faculty member or administrator, more than 500 members of the class of 2015 began the process of transitioning from high school to college, one box at a time.

“I do this every year,” said Bob Durham, psychology professor, while walking briskly to exchange room keys for a new freshman student. “It’s fun.” 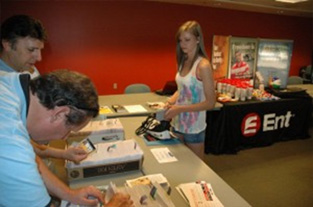 Most freshmen were greeted by members of student clubs anxious to help and to recruit new members. One group offered free pancakes to students and family members who waited in line while others promoted their clubs by wearing T-shirts with the club’s name and offering to haul televisions or boxes up as many as four flights of stairs. Student staff from the Parking Office kept vehicles on the north and south sides of housing moving, directing new vehicles into place as soon as an SUV was unloaded. Inside Monarch House, students learned about everything from parking regulations to vaccinations.

“I have free meningitis vaccines,” said Stephanie Hanenberg, director of the Student Health Center, before explaining that students who live in campus housing must have the vaccine or sign a waiver saying they understand the disease’s risks. 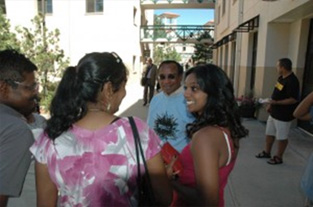 The process was efficient and reflects several years of fine tuning, according to Ralph Giese, director, Office of Residence Life. Music helped set a festive mood and more students and families seemed to pay heed to instructions that although doors opened at 9 a.m., there was no need to arrive early.

About 900 students live on campus. Plans are under way to add space for 200 more students as student housing quickly reached capacity this year, according to Susan Szpyrka, senior associate vice chancellor, Administration and Finance.

Send your thoughts and suggestions for the Newsletter.
END_OF_DOCUMENT_TOKEN_TO_BE_REPLACED