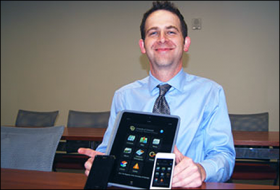 Update: The Anschutz Med Campus mobile app has launched and is now available now through Google and iTunes.

Rolling out soon to a mobile device near you: a user-friendly and flexible app that features information about the University of Colorado Anschutz Medical Campus.

The official Anschutz Medical Campus app, which is free, is being fine-tuned for launch. It includes a GPS finder, top campus contacts, photo album, directory links, Health Sciences Library information and campus safety lines. It also offers access to the CU Portal, which has tuition, financial aid, class schedule and other information.

“We are very excited with the app and believe students will find it very helpful,” said Dana Brandorff, director of communications and alumni affairs for the CU Skaggs School of Pharmacy and Pharmaceutical Sciences. “Thanks goes to IT, ATEL (Academic Technology and Extended Learning), the library, Student Senate and many others for making this project a reality.”

Brandorff said most of credit goes to fourth-year pharmacy student Andrew Webb, who spent “hundreds of hours spearheading the project.”

Webb said he began working on an app for the School of Pharmacy two years ago, largely centered around providing campus geographic information via GPS. But after talking with Brandorff, they decided to broaden the project’s scope. It was clear that other campus constituencies should be consulted, including members of the Student Senate, faculty and various schools, colleges and departments.

“We wanted everything that had to do with the Anschutz Medical Campus in one app rather than having apps for each school,” Webb said. After also consulting with the University Police, Health Sciences Library and the Bookstore, “we basically figured out what every department needed and what the students needed and made it available for the app.”

Webb also looked at what other universities' apps looked like.

The Health Sciences Library, which has worked with mobile friendly apps within the university, proved to be a critical resource -- especially Jerry Perry, Jeff Kuntzman and Cathalina Fontenelle, Webb said. The library staff includes employees with expertise in handling app updates, fixing bugs and implementing changes.

"We wanted to make an app that was able to evolve within the student body, and if the students wanted it could be changed," Webb said, noting that the university will own the code. "... It's something we can change whenever we need to."

"When I first came to school at CU (Anschutz Medical Campus) I was lost -- I had no idea where anything was," said Webb, explaining part of the impetus for the app. "It was hard to find where Financial Aid was; it was hard to find anything. ... Everybody on campus, from students to faculty to people in the hospitals, needs to know where certain things are located on campus."

He also was frustrated by contact listings that directed him to offices at the Denver Campus, only to be redirected to a similar office at the Anschutz Medical Campus.

Some of the app's features include:

Eventually, the app will be improved with more features, Webb said. "The map might get more detailed, the contacts list might change. For now it's just a good starting point. It's a foundation. Having it here makes it so much easier to add onto."

To download the app go to www.ucdenver.edu/mobile or go to the iTunes store and search under "CU-Anschutz."

Tagged with:
Skaggs School of Pharmacy and Pharmaceutical Sciences

The opioid epidemic: How we got here, how we stop it

Send your thoughts and suggestions for the Newsletter.
END_OF_DOCUMENT_TOKEN_TO_BE_REPLACED